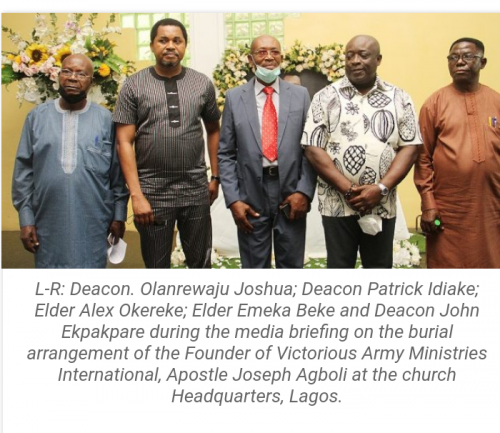 This was said by the Church leaders at a media briefing in the church premises.

The Church elders said the activities for the final journey will commence on Friday 28th with service of song and praise night, while the funeral service/ Interment follows on Saturday and Thanksgiving Service will hold on Sunday, 28th November. 2021.

Also, the elders maintained that there would not be any power tussle for transition of power, though they did not disclose who is taking over as new leader of the church.

On while the burial was delayered till November, said the church is a mega church and has members across the world, and this will give opportunity for those that will travel down to Nigeria to honored him, especially the immediate family of our father who are not within the country.

Apostle Agboli was born in 1963. He was known to be to be dedicated Christian and his love for God made him to be a committed born again and Christian student union leader that attracted the Anointing of God upon his life while a student both in secondary and tertiary institutions he attended.