Princess Orelope- Adefulire: Celebrating An Epitome Of Integrity At 62- The Legend News 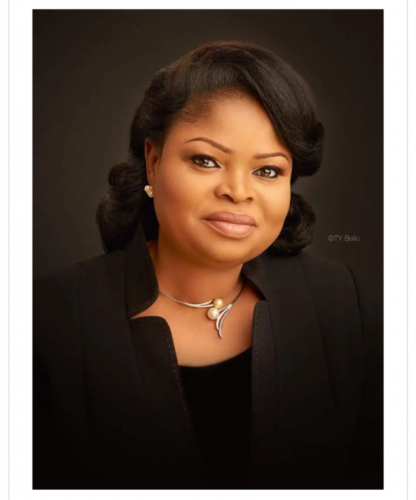 Aside this, she was not also a stranger to Princess Adejoke Orelope-Adeulire, the Senior Special Assistant to the President on SDGs. As she recalled, she has met Orelope-Adefulire when she was a Commissioner and later Deputy Governor in Lagos State. The UN DSG had at that occasion recalled how Princess Orelope-Adefulire, as the deputy governor of Lagos ensured that all funds allocated from her office to the state for projects were well accounted for.

She also noted that the former deputy governor has deployed the same diligence in her current job by not only sustaining the Office by building on the legacies she inherited, but taking Office to a different level with the introduction of innovations to guide Nigeria’s implementation of the 2030 Agenda for Sustainable Development.

The UN-DSG was particularly impressed by efforts of the SSAP-SDGs working with other stakeholders to ensure that the implementation of SDGs in Nigeria is guided by the use of data. “You have done something that is very remarkable and I hope we can amplify this at the global level and that is to address the problem of data, because if you say so, so and so number of Nigerians are living below poverty line – who are they, where are they and how can we reach them? And for me to see the level of investments you have made in trying to get the baselines out is extra-ordinary,” Ms Mohammed said during the visit.

This was a testimony to the passion that the former deputy governor of Nigeria’s foremost state has deployed to the job she was graciously appointed to lead. Her office is saddled with the task of coordinating Nigeria’s efforts in implementing the SDGs.

An accomplished public servant, administrator, social worker and grassroots politician with a passion for the advancement of the rights of women, youth and vulnerable persons, Princess Orelope-Adefulire who turned 62 on Wednesday, 29th September has provided strategic direction, leadership and coordination for efforts to achieve the global goals in actualization of the mandate entrusted on her when she was first appointed the SSAP-SDGs by President Buhari in 2016 till date.

And there are key achievements to show for her efforts in term of policies, initiatives and interventions that are changing lives in education, health, empowerment and poverty alleviation in communities across Nigeria.

Under her leadership, the SDGs Office has received commendations for initiatives such as the design of the Integrated National Financing Framework (INFF) for sustainable development, Independent  evaluation  of  priority  SDGs with Nigeria acknowledged as  the  first country to have successfully carried out independent evaluation of any of the goals  in  the  Global  South. The Office has also been receiving accolades for the  development of the Nigeria Sustainable Development Goals Implementation Plan  (2020-2030)  to  provide  a  coherent  and  overarching framework on the implementation of the SDGs in Nigeria in the decade of action, production of baseline study and indicators for the SDGs, as well as domestication and customization of the Nigeria Integrated Sustainable  Development  Goals  simulation (iSDG) model  to  provide  a  homegrown, analytical tool for SDGs based planning at national and sub-national level.

She has also led efforts to mainstream the SDGs into development plans at the national and subnational levels as well as  the  development  of  the  first  (2017)  and  second  (2020)  Nigeria’s Voluntary  National  Reviews  (VNRs)  which were presented to the UN High Political Forum on Sustainable Development to high acclaim. These are just few among the initiatives, some of which were achieved in partnership with key stakeholders.

But she has always noted that governments do not have the resources or even the capacity to achieve the SDGs alone, hence, as also indicated in goal 17 of the agenda, there must be active involvement of stakeholders outside of the government and the public sector in the process.

Against this backdrop, Princess Orelope-Adefulire has also led the process of cultivating a structured partnership for the task of implementing the SDGs in Nigeria with groups such as the Private Sector Advisory Group on SDGs; Donors Partnership Forum; and the Civil Society Strategy Group on SDGs now playing crucial roles in the implementation of the global goals in the country.

And in terms of directly touching the lives of Nigerians, this Lagos Princess has in demonstration of her passion for development and welfare of women, children and the vulnerable group led OSSAP-SDGs since 2016 to deliver key interventions in health, education and poverty alleviation among others. In the health sector, OSSAP-SDGs has delivered 149-bed, 100-bed, 80-bed Mother and Child Centres in 32 states of the country and about 200 primary healthcare centres spread across the 36 states of the federation.

Also, the Office has constructed over 2000 primary schools across the country as part of the efforts of the Buhari administration to enhance the quality of basic education and reduce the number of out of school children. In terms of empowerment and poverty alleviation, the Office has also delivered well equipped Skills Acquisition Centres across the states while the constructions of many others are ongoing.

The Centres are designed to help address issues of poverty and unemployment as well as jumpstart a surge in Small and Medium Scale Enterprises within the communities and environs. As Commissioner for Women Affairs and Poverty Alleviation and later, deputy governor of Lagos State, she demonstrated the same passion and put into practice her advocacy for progressive change and the cause of women, eradication of poverty, education and protection of children through enduring flagship initiatives.

Some of the key initiatives which has placed Lagos State ahead of its peers in term of catering for the welfare of vulnerable persons, women and children include the establishment of a  176-bed  Transit  Home  for  the  victims  of domestic violence, establishment of women economic empowerment programmes in the area of vocational skills training, financial services, assets, and support networks of peers and mentors, Support the  Girl-Child  education  initiative,  the  Child  Rights  Law  and  Domestic and Lagos State Children Parliament among such initiatives which have been copied by other states today.

Indeed, she built the First Multipurpose Home/Clinics for children with Disabilities in Lagos State to provide succour to parents, especially the mothers who have children with disabilities. Her disposition to help others without regard to religion, ethnic background and other extraneous considerations over the years earned her the appellation of ‘Iya Alanu’ (cheerful giver). 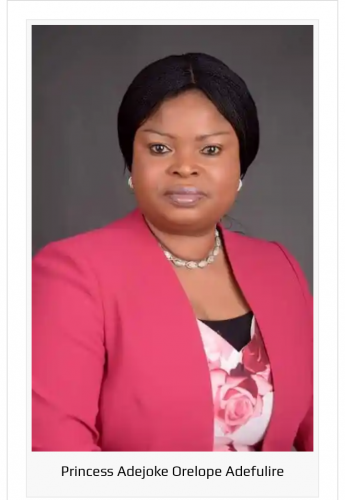 A humble, passionate advocate of peaceful co-existence and non-violence, Princess Orelope-Adefulire has certainly brought the same passion into her present job. She has also at various times declared that President Buhari’s passion for alleviation of the plight of the vulnerable has also been one of the biggest motivators for the successes recorded so far by the OSSAP-SDGs.

Her achievements and contributions to nation building and general improvement in socio-economic circumstances of humanity in about 30 years of public service career have been recognized with various honours and awards at home and abroad.

Last year, the prestigious Lagos State University conferred Honorary Doctor of Arts (Poverty Alleviation and Technology Incubation) on her in recognition of her contributions to the development of Lagos, Nigeria and devotion to enhancement of the welfare of the vulnerable citizens.

She was also awarded the International Public Servant of the Year 2007 award by the Scottish Widows; a UK-based Non- Governmental Organisation and was also  the recipient of Lagos State Man of the Year award in 2009. Princess Orelope –Adefulire has also been honored with Daisey George Award 2010 in USA in recognition of her advocacy for children’s protection and development. She was also in 2018 honoured with an award by the International Women’s Society (IWS) in recognition of her efforts at empowerment and defence of rights of women, youth and children.

And in recognition of her contributions towards the attainment of Goal 8 and 10 of the SDGs, Princess Adejoke was on May 10, 2019 inducted as a fellow of the global membership platform of the Association of Business Executives, ABE in United Kingdom. She is also a fellow of the Anglican Diocese of Lagos West and recipient of Award of recognition from Anglican Church of Resurrection.

The SSAP-SDGs is also a recipient of the Guinness World Records for the most children reading aloud with an adult at a single location, which she achieved while reading with 4,222 school children in 2011.

The exciting thing is that she is not resting on her oars as she continues to seek new ways and innovations to deliver the ultimate global ambition of ensuring that no one is left behind in Nigeria, working with other stakeholders on behalf of President Buhari. So, as she turns 62 today, it is fitting to join her family, friends, well wishers and colleagues in OSSAP-SDGs to celebrate her.

I especially congratulate her on behalf of numerous lives she has touched, appreciate her contributions to national development and implore her to continue to work hard for Nigeria, because as they say, the reward for success and hard work is more work.

Desmond Utomwen is a journalist and writes from Abuja