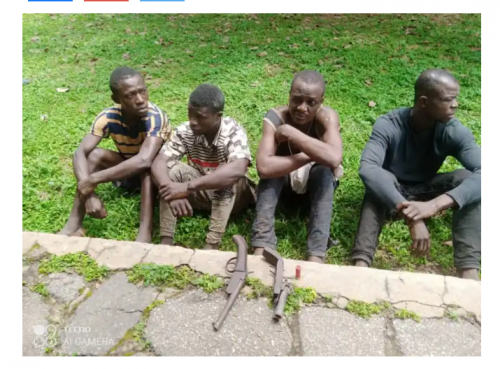 According to the command spokesperson, ASP Sunday Abutu “on the 18th of April, 2021 at about 06:00hrs, there was a clash between the proscribed Supreme Eiye confraternity and the Black Axe ‘Aiye confraternity in Ikere-Ekiti  during the course of which six(6) suspected members of both rivalry secret cult groups were killed by the aggrieved members.

“After the incident, the Rapid Response Squad (RRS) operatives swung into action and during investigation, arrested one Aladesanmi Sehinde ‘m’ 41yrs, Aladesanmi Tunbosun ‘m’ 31yrs and Ajayi Oluwaseun ‘m’ 31yrs who confessed commission of the crime alongside other suspects who are currently at large.

“Further investigation revealed that the arrested suspects took part in the looting of valuables from the Divisional Police Headquarters, Afao Ikere-Ekiti and later set the Police Station ablaze during the ENDSARS protest on 20th of October, 2020”.

However, Abutu said, the suspects had since fled from Ikere-Ekiti, before they were arrested on the 20th of September, 2021 by the command’s Rapid Response Squad(RRS).

Also, on the 19th of September, 2022 at about 07:30hrs, the Rapid Response Squad (RSS) operatives arrested one Abu Tobi, Falodun Ojo, Ogundele Tope and Adams Saheed for kidnapping one Oyetuyi Taiwo ‘m’ and Ibitoyi Pelumi ‘f’ in Soludero hotel, Isan-Ekiti.

It was gathered that on 18/09/2021, Abu Tobi, Falodun Ojo and Ogundele Tope left Ayede-Ekiti on an unregistered Boxer Bajaj motorcycle, arrived Isan-Ekiti at about 15:30hrs and settled at a drinking joint in Isan-Ekiti very close to Soludero Hotel where their targets were lodging.

The three suspects, according to the police record also invited one Adams Saheed to join them before carrying out their plan.

At about 20:30hrs of the same day, the suspects moved into the Hotel and abducted the two victims after which they started demanding for ransom of twenty million naira (₦20,000,000:00) from the family of the victims.

Thorough investigation by the police led to the arrest of Abu Tobi and Falodun Ojo and the subsequent arrest of Ogundele Tope and Adams Saheed. One unregistered Bajaj Boxer motorcycle was recovered from the suspects.

Police said, upon the receipt of the information, the Command’s Operatives conducted a thorough investigation which led to the arrest of one Ogunkuade Agboola ‘m’ and Ajayi Tunde ‘m’ on the 22nd of September, 2021.

Relatedly, on the 17th of September, 2021 at about 22:35hrs, three armed men invaded the provision shop of one Ayodeji Olusola at Ekute junction, Ado-Ekiti.

The victim, police confirmed was robbed of cash in naira and items valued ₦150,000:00 and upon the  swift response of Command’s Rapid Response Squad(RRS), the armed robbers were dislodged and took to their heels but one Adebayo Akeem Banji was arrested at the scene with one cut to size locally made single barrel gun loaded with live cartridges.

The scene was further searched and another cut to size locally made double barrel gun was recovered, which the arrested suspect claimed belongs to one of the fleeing gang members.

He further mentioned one Oyimbo and Ayo as the fleeing suspects.

Also, the Command based on the information received on 21/09/2021 at about 15:00hrs that a 3yr old minor was defiled by one Olarenwaju Seun ‘m’ 18yrs at Iyana Emirin Area, Off Poly Road, Ado-Ekiti, the command’s Operatives swung into action and arrested the alleged suspect.

Investigation by the police revealed that the suspect lured the victim into his room on 06/08/2021 at about 15:50hrs where he had carnal knowledge of her.

The victim was thereafter, taken to the hospital for medical examination and treatment.

The expert opinion proves that there was a penetration into the private part of the victim.

Meanwhile, further police investigation revealed that when the grandmother of the victim heard about the incident, she demanded the sum of ₦50,000:00 from the parents of the suspect for amicable settlement of the case. 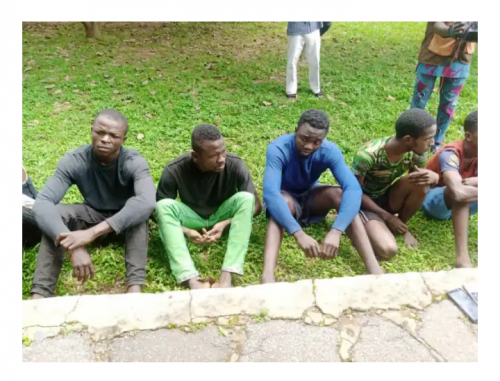 The said money was said to have been paid to her and she converted it to her personal use.

She was also arrested and shall be charged to Court alongside the suspect for compounding felony and defilement respectively, Police said.

On 24th of September, 2021 at about 18:45hrs, the victim was trekking along Federal Housing Road, Ado-Ekiti when she was suddenly accosted by the suspect, one Ayodeji Ojo, who held her hostage.

The suspect had observed that there was no one close that could come to the rescue of the victim as a result of which he tore her Jean skirt and pant and forcefully had carnal knowledge of her on bare floor.

Police account revealed that immediately after the incident, the victim ran home and narrated her ordeal to her brother who later reported to the Police.

Effort intensified by the Police led to the arrest of the suspect and during interrogation, the suspect made confessional statement to the commission of the crime.

“The victim has been medically examined at the hospital and expert opinion confirmed that there was a penetration”, Abutu said.

The victims were thereafter whisked into the bush where the kidnappers started demanding for ransom.

Police said upon the receipt of the information, a team of the Rapid Response Squad (RRS) Operatives swung into action for possible rescue of the victims and the arrest of the culprits.

Intensified effort led to the arrest of one of the suspects called Usman Ibrahim Hassan.

Three handsets belonging to the victims were recovered from him.

Speaking during the parade of the suspects, the Command spokesperson, ASP Abutu Sunday said, It should be noted that the Command, under the leadership of CP TUNDE MOBAYO, has prioritized the security of lives and properties of the good people of Ekiti State as well as ensuring a safe and peaceful society where everybody moves about their lawful Businesses and goes to bed without any form of apprehension.

“The command shall not relent in its efforts to deliver the mandate of protecting the lives and properties of the good people of Ekiti State come what may.

“The Command appreciates the good spirited members of the public whose credible and timely information to the police aided in tracking down and arresting some of the suspects being paraded today.

“The Command also acknowledge the efforts, cooperation and constant supports of the military, Civil defence Corps, Amotekun Corp and other Security agencies including the local hunters and the vigilantes.

“The tremendous support of the government of Ekiti State under the leadership of His Excellency, Dr John Kayode Fayemi is well acknowledged and sincerely appreciated.

“The Command, while assuring members of the public that those paraded today shall be charged to Court for prosecution as soon as possible, implores everyone to be security conscious and ensure they give credible and timely information to the police through GSM number 08062335577 or the nearest Police Station that could lead to the arrest of criminal suspects in the society”.