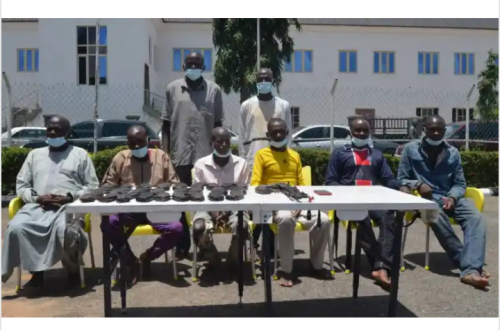 Operatives of the Intelligence Response Unit of the Nigeria Police Force have arrested eight notorious high-profile kidnapping suspects indicted in Police investigations for the abduction and eventual murder of Pa Dariye Dafwan, the late father of former Governor of Plateau State, in Horop community, Bokkos LGA of Plateau State.

Pa Dariye was abducted on 17th June, 2020 and shot dead eight days after the criminals hav​e collected a ransom of N10 million from the family of the deceased. The arrest of the suspects follows unrelenting efforts by the Police to ensure perpetrators of the dastardly act are arrested and made to face the wrath of the law.

The breakthrough that led to the arrest of the suspects began with the arrest of one Abubakar Mohammed a.k.a Buba, male, 23yrs, native of Gada Biyu in Daffo district, Bokkos LGA, Plateau State. Buba is one of the principal suspects in the kidnap operation. The confession of the suspect which revealed how they abducted and murdered the nonagenarian, assisted the Police team in apprehending seven other members of the gang: Ya’u Saidu aka Ya’u Kaban male, 40yrs, from Kaban Village, Bokkos LGA, Plateau State; Titus Ezekiel 34yrs from Horop, Bokkos LGA; Dauda Isah male, 30yrs, from Horop; Sunday Ibrahim, male, 35yrs, Mushere tribe from Horop; Mangut Shumwar, male, 30yrs, from Horop; Henry Amos, male, 35yrs native of Horop, and Jethro Ngusen, male, 57yrs, native of Horop.

Investigations further revealed that it was Jethro Ngusen, the mastermind and convener of the gang, that instructed one of the gang members, Mangut Shumwar to kill Pa Dariye, because he feared that Pa Dariye might recognize the suspects since majority of them are from the same village with the deceased. Jethro was also identified as the one who took custody of the ransom and later shared the proceeds of the crime amongst the gang members.

Similarly, the Police team arrested one Sadiq Abubakar ‘m’ 31yrs old from Kogi State and one Peter Moses ‘m’ 25yrs old from Kaduna State who abducted a 22yr-old lady to a location in Suleja. The suspects held the young lady hostage, had repeated canal knowledge of the victim and extorted money from her parents as ransom before her release. Investigations by the Police team show that the suspects, who are serial virtual kidnappers, usually meet their victims on social media platforms particularly, Facebook, and thereafter lure them to their criminal hideout before subjecting them to sexual molestation and further obtaining ransom from their families.

The Police operatives also intercepted three suspects: Emmanuel Joel 42yrs, Ayuba Joel, 30yrs, Hassan Umar, 30yrs on 28th August, 2021, in possession of one AK49 rifle loaded with fourteen live ammunition and twenty-six (26) AK47 magazines, at a border town between Nasarawa and Taraba State. Investigations by the Police team revealed that the suspects are criminal arms dealers who supply weapons to criminal elements in Nasarawa and Taraba States. Efforts are being intensified to arrest members of the gang currently at large.

The Inspector General of Police, Usman Alkali Baba, has assured that the Force is committed to working with law abiding citizens to secure the nation and reduce crimes to the barest minimum in the country. He advised users of the social media to remain circumspect and protect themselves from cyber crooks masquerading as online friends.

All the suspects will be charged to court on completion of investigations.