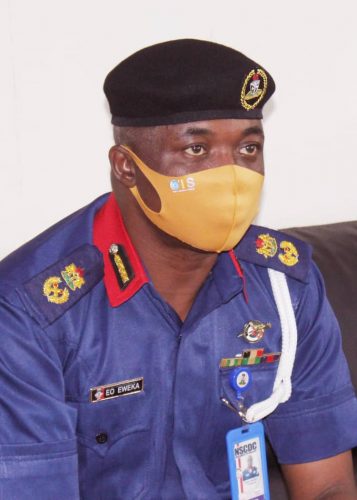 SECURITY AND FIGHT AGAINST OIL PIPELINE VANDALISM IN LAGOS STATE :

In lieu of the renewed and re – invigorated efforts of the Commandant, Nigeria Security and Civil Defence Corps, Lagos State Command, Commandant Eweka Douglas Okoro, towards ensuring a zero tolerance against oil pipeline vandalism and other form of criminalities in Lagos state, the Marine and anti – vandal team of the Badagry division, of the Command, who were on routine surveillance and patrol, on Tuesday, 7th September, 2021, midnight at about 01:54hrs intercepted some suspected vandals who were engaging in their dastard criminal activities, in the Badagry area of the state.

The Divisional Officer, Badagry Division, Lagos State Command, Chief Superintendent of Corps ( CSC ) Akinyemi Rasheed Ayodeji, who led the operation, further stated that the suspected vandals at the scene took to their heels, on sighting the gallant men of the division, when they were about perfecting their evil act of economic sabotage.

The gallant marine and anti – vandal team, who intercepted the suspected vandals at the Badagry division, discovered some thick nylons ( white colour ) wrapped with sacks loaded with unknown quantity of litres of petrol, numbering four eight (48) in quantity and another thirty six 30litre kegs loaded with (PMS), which the vandals intended to cart away around Mangoro creek along Iya’fin waterways heading towards the Republic of Benin. 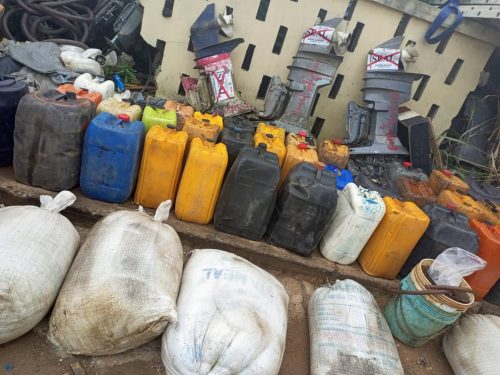 The Commandant has immediately ordered the Anti – vandal unit of the Command to evacuate the suspected products back to the Lagos State Command, Head Quarters, in Alausa, Ikeja, Lagos, in a bid, to carry out further intelligent investigation.

The Commandant, Commandant Eweka Okoro has also directed that the security of lives and property and the protection of oil pipelines in the Badagry Division and other oil pipeline areas, in the state be beefed up immediately.

The Commandant said that the Nigerian National Petroleum Corporation ( NNPC ) office in the state has also been contacted for proper evacuation of the products because of the highly inflammable nature of it.

Commandant Eweka Okoro seized the occasion of this excellent operation, to further reiterate the Command’s readiness and commitment to ensuring a zero tolerance against oil pipeline vandalism and other form of criminalities in the state. He further assured the good people of Lagos and the Government of Lagos State of his unflinching commitment and dedication towards sustaining the already established peace and security in the state. He promised that the Corps will continue to work assiduously and laboriously, with the Government and other security services or agencies and stakeholders in the state to further proffer solutions to any form of security challenges that may want to raise their ugly heads.