My Life Is Under Threat, Adron Homes Wants To Claim My Land Illegally – Man Alleges- The Legend News 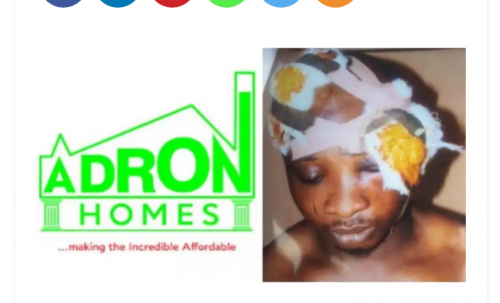 A businessman in Ibadan, the capital of Oyo State, Mr Johnson Samuel Olubode, has appealed to security agents in the state to come to his rescue over the destruction of his properties, allegedly by Adron Homes.

He also accused the management of Adron Homes of threatening him with some acres of land which he claims has all necessary documents has approved by the Oyo State government.

Johnson, while speaking with journalists in Ibadan on Thursday said, “I bought the land since 2009 and got the C-of-O in 2010. Since then, I have been using the land, which is about 23.3 hectares of land, for farming purposes at alugi-eganarin- Bako-Fenwa area of Ibadan.”

He also revealed several attempts by landgrabbers, that he alleged to be Adron Homes and steps he had taken so far to forestall them.

“Now, they are erecting fences on the same land, which I don’t want them to continue but we have to use force on them. They always come there with several thugs, carrying dangerous weapons and I don’t want a situation where they will kill someone on the land. So, that is why I want to take a legal channel to recover my land.

“Adron Homes and properties are behind this because all the stations we have been to, their lawyers use to follow all those land grabbers and one of their staff, Sanya by name, use to come along with the same land grabbers. Even the last time we went to SARS, one of the officers told me that they were given 750,000 Naira to kill me and, on that day, the lawyer to Adron Homes, and that Sanya equally came to Lagos, SARS Office at Adeniji Adele. And up till now, they have been working on the land, fencing it.

“So, it is Adron Homes that engineered those thugs and the land grabbers. Now, my life is being threatened because I have been receiving series of calls since then. There was even a time I ran to hide at Woro, around Igboho, Saki area in Kwara State for almost two weeks. That was why I was not around during the protest they did in Olubadan House. It was during that time that somebody called me that I should come down to say my version of the story, which I did,” he revealed.

He urged the traditional institution in Ibadan and the Commissioner of Police in Oyo State to intervene on this matter before it degenerates into an uncontrollable situation.

He called on the state government to investigate the issue and not allow such companies hiding under the pretence of providing homes to continue to exhibit extortion and land grabbing just for personal gains.