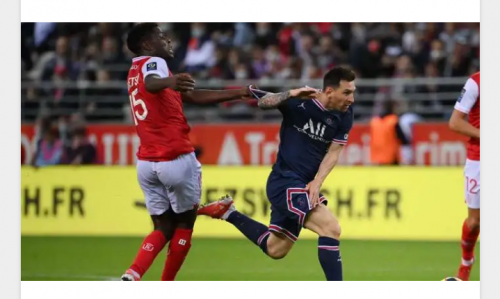 Lionel Messi has made his Paris Saint-Germain debut, coming on for Neymar after 66 minutes in a clash against Reims.

It is the first time that Messi has played a competitive club match for a team other than Barcelona.

He arrived at PSG earlier in August after Barcelona were forced to release him for financial reasons.

Previously in the game, Kylian Mbappe had given PSG a first-half lead, with the forward netting despite rumours linking him with a move to Real Madrid in the days leading up to the game.

He had netted a second moments before Messi came on, making it 2-0 for the visitors.

The much-anticipated moment came just one minute after Mbappe’s second goal, as Messi came on for his former Barca team-mate Neymar.

Messi’s performance was relatively low key as there were no major moments in favour of his side following his arrival. He took up a position as a No.10 playing behind Mbappe and linked well with the centre-forward.

Speaking to Amazon Prime after the game, PSG head coach Mauricio Pochettino said of Messi: “He’s been good. I’m very happy to see him make his debut. It was important for him. He is far from his best form, but he is training very well.

“He will be better after the [international] break. We expect the best from him.”

Messi signed a two-year deal with PSG at the start of August after his 21-year stint with Barcelona came to an end.

The Argentine, though, was not initially in a fit state to play with his new club. He had been out of action for around a month when he joined PSG, having spent time on holiday in Miami and Ibiza following the end of the Copa America, in which he led Argentina to their first international title since 1993.

Messi has only been back in training for a couple of weeks and has been short of match fitness, which resulted in his debut being delayed.

He will hope to make his first start for the club after the international break, when PSG play newly promoted but undefeated Clermont at Parc des Princes.