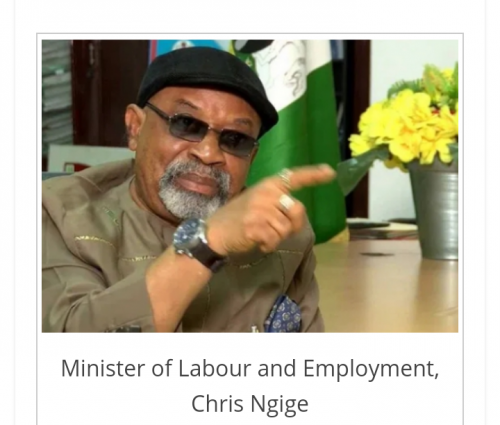 The Nigeria’s Minister of Labour and Employment, Chris Ngige, has asked doctors in the country to be humble and carry themselves with dignity, rather than try to compete with God.

His statement is in reaction to the ongoing strike by members of the National Association of Resident Doctors (NARD).

Mr Ngige, while speaking at the 2nd Summit of Medical Elders Forum (MEF) with the theme, ‘Medical Profession: a Look into the Past, Present, and Future,’ on Thursday in Abuja, said Nigeria’s medical profession is in great danger.

He said: “At no time in the history of medical association am I seeing our association and our profession in danger as I am seeing now. Many people will not see it but from where I am sitting and standing, I can see danger ahead.

“We are one of the oldest professions on earth, metamorphosing from natural and traditional healers to take away pain from people and consequently save lives.

“We don’t create lives, God creates, we only preserve people’s lives through the act of God. In doing so, God has given us some powers and those powers are near his own to create.

“But there is something God does not want, God does not want when he gives you powers you use it to try to say that you are like him or you are competing with him. God loves you to do that which he has asked you to do; to use that power with humility.”

On the incessant strike actions, the minister said doctors in the country only embark on strikes when their colleagues are in political position.

He said: ”Doctors should ask themselves questions; why is it that it is when your colleagues are in government that you go on the greatest number of strikes. Some of these colleagues were Presidents, Secretary Generals of NMA and even NARD.

“Dr. Onyebuchi Chukwu, Dr. Isaac Adewole faced plenty of strikes, since our government came I have consolidated four strikes. Something is wrong.

“We must start by telling ourselves the truth. You say they dislike doctors, what did you do that they disliked you? Yes, there is peer envy, yes some wanted to study medicine and they couldn’t, we know it, and if you know it, you carry yourself with dignity and humility.”

Earlier, President of the Nigerian Medical Association (NMA), Innocent Ujah, said a good number of people within and outside the health sector were envious of doctors, without appreciating the tedious academic process of becoming a doctor.

“Everybody is envious of doctors and what have we done? Is it a sin to be intelligent? By the way we are the most intelligent,” he said.

He said they were contradictory and form part of the reasons behind the disharmony in the nation’s health sector.

“Circular from the Salaries and Wages Commission is coming out saying that there is no more CONMESS for doctors who are lecturers but it is there as a circular so why is the doctor singled out? In Lagos state university, a doctor with fellowship cannot contest vice-chancellorship.

The NARD on Monday, August 2 resumed indefinitely the strike it had suspended earlier in April, saying having observed things for more than 100 days, the union realised that the government was taking its members for granted.

The doctors’ grievances are contained in a Memorandum of Action (MOA) endorsed in April by both the striking doctors and the government representatives including Mr. Ngige.

The doctors had demanded, amongst other things, the immediate payment of COVID-19 inducement allowance to some of its members in federal and state tertiary institutions.

They also demanded the review of hazard allowance for health workers due to the risk associated with their profession.

The association also decried the undue hardship its members on GIFMIS platform are facing due to the delays in payment of their salaries ranging from three to seven months.

Mr Ngige, while appearing on a Channels Television’s programme – Politics Today – said the doctors were taking the country for a ride.

He also threatened that the doctors would be sacked by their various employers if the seven-day ultimatum he issued them expires.

The ultimatum, according to the minister, expired on Monday.

But in his reaction, the NARD President, Okhuaihesuyi Uyilawa, said the strike would continue until their demands are met.

“Let him sack all of us, we are not begging him. He is just the minister of labour and not President Muhammadu Buhari.

“He’s not even the first to sack doctors. Onyebuchi (Chukwu), the health minister between 2010 and 2014 , sacked doctors during his time. The only thing that happened was that it brought the sector down.

“When Ngige does the same thing, it will only appear in his legacy as the labour minister that sacked doctors because they are demanding their wages and welfare packages.”

The body is an association of resident doctors, who are undergoing training to become consultants in various fields of medicine.

They are described as residents because by virtue of their training, they are expected to be available in the hospitals with their patients every day.

They make up the largest percentage of public medical practitioners in Nigeria and they are closer to the patients in terms of the management of cases.

Since the beginning of the strike, Nigerians who need medical attention are relying on private hospitals for medical services