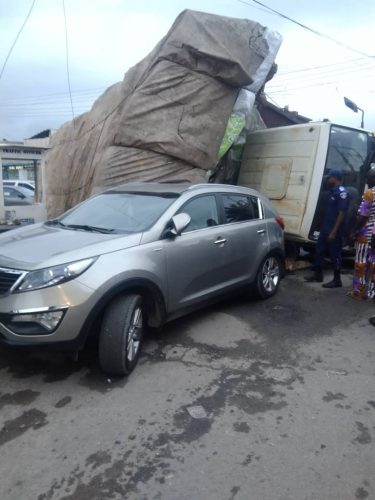 The Lagos State Emergency Management Agency, LASEMA, in it’s several overnight operations, cleared several roads that would otherwise have been shut down by the road traffic incidents today 22nd August, 2021.

One of such incidents is the lone traffic accident that occurred at Kudirat Abiola Way, Oregun inward Ojota which resulted in an overturned oil tanker truck at the above mentioned location.

The incident made LASEMA sound a note of warning to all residents of that area to abstain from activities that can lead to secondary incidents by actions that can lead to ignition or exposure to any form of naked fire despite the fact that the Agency had activated the state’s Emergency Response Plans.

Following the distress call received via the 767/112 Emergency Toll Free Lines, LASEMA DG/CEO, Dr. Olufemi Damilola Oke-Osanyintolu announced abstinence from naked flames as part of necessary precautionary measures, when he stated that, “The agency has responded to distress calls concerning an overturned tanker on Kudirat Abiola Way, and has activated its response plan. 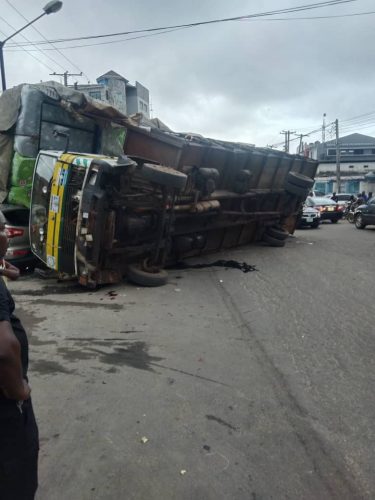 “Residents are urged to take precautions and refrain from igniting any form of flame.

The precautionary announcement was in tandem with the Situation Report and updates which stated that an oil tanker accident at Oregun road inward Ojota which was Transmitted at 10:37p.m through the Agency’s Toll Free Emergency numbers of 767/112 was responded to by the Agency within 5 minutes of it’s occurrence in an operation that was concluded this morning.

Situation Report on the tanker truck accident at Kudirat Abiola Way, Oregun inward Ojota has it that “Upon arrival it was observed that a Howo tanker truck loaded with 45,000 liters of diesel (AGO) with registration number T 9607 LA had a lone accident at the aforementioned location. 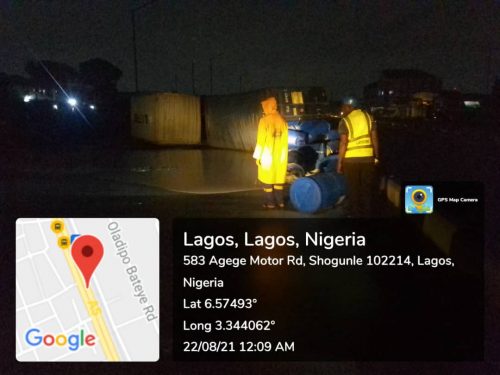 “Further investigation gathered at the scene revealed that the accident was as a result of over speeding and recklessness on the part of the driver as he was descending the sloppy road which led to the tanker crossing the entire road in a tilted position and spilling its content on the road.

“Fortunately, there were no casualties, nor fatalities involved.

“However, due to the swift response of the agency’s Tiger team and LASG fire service, the entire area was quickly blanketed and cordoned off.

“The diesel was transloaded into another truck. 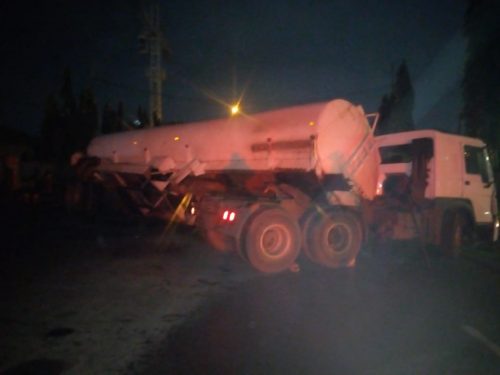 “The accidental tanker truck was recovered with the aid of the agency’s Crane (Charlie) and taken to Cappa Base.

“However, the spillage on the road and drainage around that corridor was blanketed to prevent any form of secondary accident.

“In conclusion, road is now safe and opened for vehicular movement.

“Recovery operation concluded, Tiger Team heading back to base”.

Similarly, in the same overnight operation, in another location, LASEMA safely recovered two fallen 20feet containers at Ladipo inward PWD in an incident that occurred close to midnight, and was relayed to the Agency at 12:02a.m.

The operation was activated by the midnight distress call transmitted via LASEMA 767/112 Toll Free Emergency numbers that activated the operation which terminated about 2:00a.m

Situation report on the above recovery and location has it that, “On getting to the scene, the LRT discovered a trailer that was conveying double 20ft containers involved in a lone accident when it hit the median curlvet and fell sideways.

“Further investigation revealed that it was due to reckless driving and overspeeding thereby obstructing the entire express way along the axis.

“No casualties were recorded.

“However, the LRT and LASTMA were responders making efforts to evacuate the impediment off the road to free traffic and avert any secondary incident.

“The agency’s heavy duty equipment were deployed to move the trailer and containers off the road to a layby.

“All secondary incidents averted. Operations concluded. LRT heading back to base”.

In a further operation in an incident which occurred at Hacco junction off Adeniyi Jones that was Transmitted at 7:10Pm when a truck conveying mattresses fell on a KIA jeep due to reckless driving resulted in obstruction of vehicular movements along the axis.

Situation report on the road accident at Hacco junction off Adeniyi Jones, elicited a response time of 6minutes by it’s Arrival Time of 7:16p.m at the above incident. 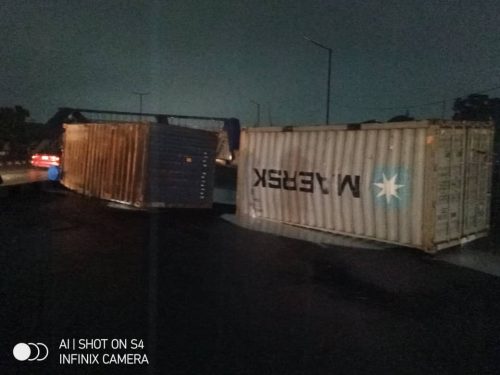 “Upon arrival of the Tiger Team at the incident scene, it was discovered that a truck loaded with mattresses with plate number NRK 290 XB fell on a KIA jeep with plate number KRD-795FQ thereby obstructing vehicular movement along the axis.

“Further information gathered revealed that the accident occurred as a result of reckless driving.

“However, Tiger team, LASTMA and Nigerian Police are responders at the scene working better together to evacuate the affected vehicles off the road.

“The vehicles were recovered off the road with the aid of the Agency’s heavy duty equipment and handed over to Police Officers from MAN Center Decision Ikeja.
Recovery operation successful”.