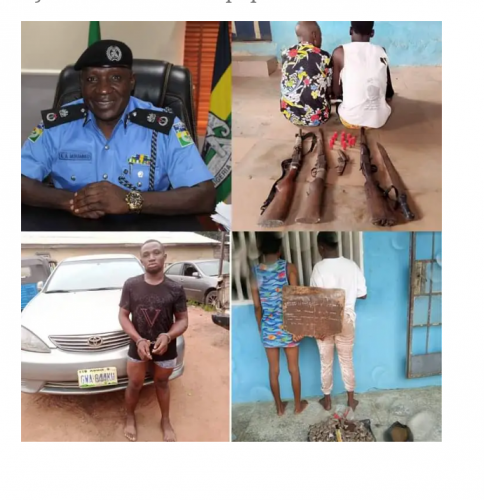 Delta State Police Command under the leadership of CP Ari Mohammed Ali has step up the fight against kidnapping, armed robbery, cultism and criminality has the Police operatives of the command engaged some armed robbers in a fierce gun duel at the Alifikede area of Agbor in Delta State.
In a press statement by the Command’s acting Spokesperson, DSP Edafe Bright stated that, “On the 28/7/2021 at about 2100hrs, acting on intelligence gathered over a period of time concerning a kidnap suspect who has been terrorizing Agbor and it environs, The Area Commander Agbor Detailed surveillance team to Alifikede. The operatives on arrival surrounded the area, which made it impossible for the suspects to escape. The operation was a huge success as one Adamu Bayero ‘m’ 43yrs old who had a bullet injury sustained from a gun duel with Police during previous kidnap operations and one Mohammed Ahmed ‘m’ 26yrs old were arrested.
Further investigation led to the recovery of three (3) single barrel rifles, one (1) locally made pistol and nine (9) cartridges. Suspects have given useful information regarding their various nefarious activities. Investigation is ongoing. Also, on 26/7/21, information received by the DPO Orerokpe Division revealed that somebody was kidnapped at Aragwa community and the kidnappers took the victim to the bush, The Divisional Police led a combined team of police, army and vigilante who went after the kidnappers, after combing the bush for hours the kidnappers realized that the police were not relenting so they quickly abandoned the victim and escaped. The victim was rescued unhurt. Manhunt for the fleeing suspects is ongoing.
Sequel to the manhunt for a murder suspect in Sapele over a murder case, intelligence later revealed that the gang make use of a Red Camry as their operational vehicle. On 26/7/21 at about 2130hrs the red spider Camry was sighted along Mosogar junction heading towards Oghara. The DPO mobilized and led a team of police to the area. The hoodlums on sighting the Police sped off and fell into a ditch, the hoodlums alighted from the vehicle and ran into the bush. The police continued chasing them, during the chase, there was a gun duel between the suspects and the police, one of them was arrested with gun shot injury while others escaped. The arrested suspected was later identified as Aejoke David ‘m’ A.K.A Okoro. One Red Camry with Reg no GWA 900 KF, one locally made gun and three expanded cartridges were recovered from the scene. The injured suspect was rushed to the hospital, where he gave up the ghost while receiving treatment. Manhunt for the fleeing members of the gang is ongoing.
On the 25/7/2021, The DPO ‘B’ Division Asaba acting on credible information that an ash colour Toyota Camry car Reg. No. GWA 644 KH was snatched at gun point on the 22/7/2021 at about 2005hrs by three armed men along Asaba Benin express way by NNPC filing station. The Divisional Police officer quickly detailed operatives from the division in conjunction with undercover police who went out in search of the said vehicle. The search continued for three days and paid off on 25/7/2021 when the vehicle was recovered at Akwuebulu Asaba. One of the suspect’s Ifeanyi Pascal ‘m’ 24yrs of Ahamefuna Street Akwuebulu was arrested. Similarly, The DPO GRA Division Asaba acting on the information received from unknown caller that on the 24/7/2021 about 2230hrs, a custom colour Toyota Camry car with Reg. No. YAB 439 JH was also snatched at gun point by his gate No. 10 Crescent Street Asaba. The DPO GRA division informed all nipping points in within the metro, Stop and search was intensified and Luck ran out of the suspect at about 2345hrs of same date when the vehicle was intercepted at head bridge Asaba on his way to Onitsha Anambra State by men of Counter Terrorism Unit (CTU) at their pin down point and one Zubari Abdulmalik ‘m’ 22yrs old was arrested and the vehicle recovered. Investigation is ongoing.
As part of preventive measures to checkmate criminals/cult activities and to also curb drug menace in the Command, on the 28/7/2021 at about 2000hrs the Divisional Police Officer Ozoro raided criminal hideouts at Erovie quarters Ozoro. During the raid, two suspects namely: Hope Azion ‘f’ 25yrs old of Erovie quarters Ozoro and Joy Okorie ‘f’ 21yrs old of same address were arrested, a nylon bag containing three hundred and ninety (390) wraps of weeds suspected to be cannabis Sativa were recovered from them.