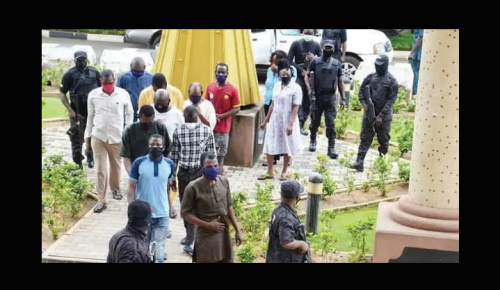 The Department of State Security on Wednesday finally produced the 12 aides of the Yoruba Nation Activist, Sunday Adeyemo popularly called Sunday Igboho in court as ordered.
However, in court, the DSS requested to continue to keep four of the 12 aides while agreeing to release eight of them.
The DSS claimed before the trial judge, Justice Obiora Egwuatu that the four it requested to keep have serious cases bordering on arms handling and other cases.

The security agency claimed that illegal firearms were found with them including AK-7 and other arms.
The DSS said it was not certain if the four are released, they would be available for further investigations.
Igboho’s lawyer, Pelumi Olajengbesi, argued that keeping the four would amount to an abuse of their fundamental human rights.
The lawyer said the DSS would have to produce another application before the court if it must keep the four in its custody.
The DSS told Justice Egwuatu that releasing the four along with the eight aides would jeopardise investigations.
The court went on breaking as the judge promised to return to give his ruling over the fate of the four aides.