Covetous Salesman Masterminds Robbery In Own Shop- The Legend News 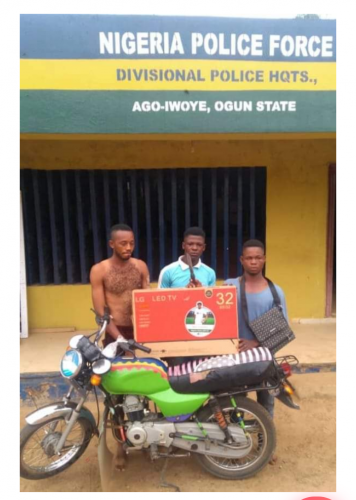 …As 2 Robbery Suspects Confessed To Crime

Terrible things are really happening, why would a salesman give out himself to be stabbed all in the name of proving a point; that armed robbers, in the process of operating in his shop, injured him? Whereas he actually masterminded the robbery.

Lucky Otuonye, who initially succeeded in getting sympathy over the double misfortunes of loss of ware and bodily injury in a shop he worked as a salesman in Ago-Iwoye, Ogun State, was later discovered to have intentionally invited the two armed robbers for the operation.

His secret, however, blew open when the hoodlums, who had already made away with a 32-inch Plasma Television were arrested in the neighbouring town of Awa-Ijebu.

The two suspects, Chinedu Peter and Matthew Igwe, were said to have, in their confessional statement, mentioned Lucky as the brain behind their operation.

According to the police in a press release issued by the Ogun State Police Command Public Relations Officer (PPRO), DSP Abimbola Oyeyemi, the Ago-Iwoye Police Division received a distress call on July 27, 2021 to the effect that armed robbers had invaded Abuking Electronics Shop at Olopomerin area of Ago-Iwoye.

“Upon the distress call, the DPO, CSP Paul Omiwole and his men swiftly moved to the scene. By then, the robbers had fled the scene with a 32-inch Plasma TV. The salesman was discovered to have been stabbed on his left hand, and was quickly taken to hospital for treatment. As part of efforts to track down the fleeing armed robbers, all adjoining Police stations in the area were alerted to be on the lookout for them”, the PPRO said.

Continuing, the PPRO said: “Some hours after, members of hunters group saw the two men with a Plasma television in Awa-Ijebu and quickly informed the police who promptly arrested them in Awa Ijebu. They were later taken to Ago-Iwoye, where they confessed being responsible for the robbery operation but added that it was the salesman that invited them for the operation”.

To this end, the salesman was apprehended and has made a confessional statement on the role he played in the whole saga.

Recovered from them were the television set, a Bajaj motorcycle and a knife.

“Meanwhile, the commissioner of police, cp Edward Awolowo Ajogun, has ordered a thorough investigation into the past activities of the suspects with the view to charge them to court as soon as possible”, the statement added.