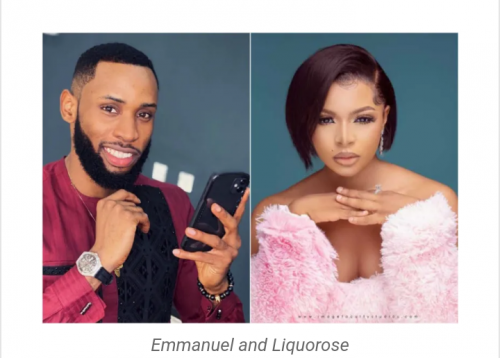 The sizzling romance between Big Brother Naija Season 6 housemates, Emmanuel and Liquorose is on the upswing again, as the latter could be seen whispering obscenities to her love interest in the house today.

Their relationship is difficult to predict, and actually look unreal sometimes, with Emmanuel appearing to be not so much in it.

But against all odds, they seem to be waxing strong, as the two are increasingly to be found with each other.

Today, when the two were seated at the dining table, Liquorose mouthed what she felt like doing to Emmanuel. She apparently did not want the others to hear.

Emmanuel failed to grasp it as she tried to say it many times.

She said: “I want to rape you” several times, and repeated the verb many times with Emmanuel still not getting it, forcing her to exclaim in exasperation.