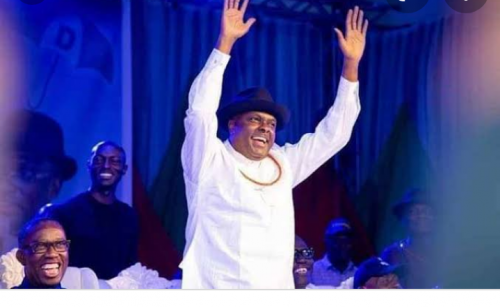 In a congratulatory message to Ibori on the occasion of his 63rd birthday, Uduaghan praised the former governor for his enormous contributions and achievements.

‘’Chief James Onanefe Ibori faithfully and diligently served the good people of Delta State, cast aside all forms of tribalism and delivered the dividends of democracy to them’’.

Uduaghan who is also the Alema of Warri Kingdom and Chief Executive Officer (CEO), Webster Group of Companies hailed Ibori for touching the lives of many Nigerians, shaping the future of his people, encouraging broad participation in governance and lifting Delta State to unprecedented relevance.

He commended the ex-governor for implementing the bottom-top philosophy, institutionalizing due process and sustaining peace in Delta State through the gospel of peaceful co-existence, good neighbourliness and unity amongst all’’

‘’Chief James Ibori carried traditional rulers along in sustaining peace, through periodic meetings. He created an enabling environment for the private sector to thrive. He brought development and transformation to the geo-political entity called Delta State through Operation 2000 Projects’’ Uduaghan said.

‘’Chief James Ibori promoted peace, harmony and development in the Niger Delta. He campaigned for the diversification of the nation’s economy, power shift, resource control and derivation as well as enthronement of equity and justice in a restructured Nigerian polity where true federalism reigns. He also campaigned for decentralization of policing and security responsibilities of government’’.

The Warri Chief emphasized other achievements of the former governor.

‘’Chief James Ibori built bridges of friendship and understanding among Nigerians. He demonstrated that leadership is not a function of tribe but a matter of vision, determination and mission. He also recorded successes in security, job creation, human resources capacity building, gender and youth empowerment, environmental sustainability and remediation, fiscal discipline and budgetary reforms’’.

Uduaghan also underscored Ibori’s role in the training of Deltans in local and foreign universities.

The Alema of Warri extolled the former governor’s exemplary dedication to service and his leadership qualities.

‘’As a responsible governor, the relationship between the Executive and the Legislature was a model in terms of peaceful co-existence, separation of powers and checks and balances. The judiciary also enjoyed tremendous support and co-operation from the Executive. Indeed, Ibori exceeded the expectations of the founding fathers of Delta State through visionary, exemplary and transformational leadership’’.