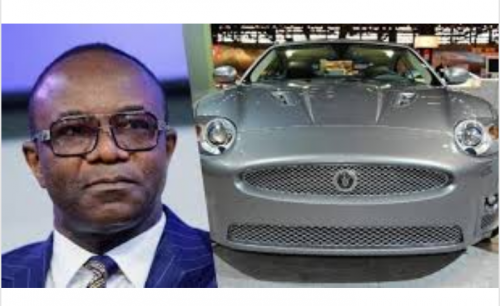 Former Nigeria Petroleum Minister, Ibe Kachikwu has been accused of smuggling a stolen car from Jaguar’s UK Assembly into the U.S., court documents revealed.
A U.S. court has ordered the confiscation of the stolen vehicle found in possession of Mr Kachikwu. The order for forfeiture came after the ex-Minister tried to allegedly smuggle the stolen vehicle into the U.S.
The vehicle, a 2007 Jaguar XKR, was stolen from a Jaguar Assembly facility in Birmingham, England. In the complaint sheet, the car manufacturer explained that the vehicle was made for use in the Czech Republic as it did not meet the safety standards set out by the U.S.
It also told the U.S. court that the stolen XKR was shipped to Lagos.
The XKR was seized on June 15, 2011, at the Los Angeles/Long Beach seaport after Mr Kachikwu attempted to smuggle it into the country. The documents said, “Kachikwu caused the defendant vehicle to be exported to the United States from Nigeria.”
In a consent judgment signed by Consuelo B. Marshall for the Central District of California, the U.S. government maintained that the stolen vehicle was subject to forfeiture in line with federal laws.
“United States of America (“plaintiff” or the “government”) filed a complaint for forfeiture against one 2007 Jaguar XKR. The government alleged that the vehicle was subject to forfeiture pursuant to 19 U.S.C. §§ 1595a(c)(1)(A) and 1595a(c)(2)(A),” the documents added.
Kachikwu admitted to the forfeiture of the vehicle and agreed to pay $10,000 instead of the vehicle being confiscated, though he claimed he was not a party to the theft.
“Claimant has acknowledged that the government had probable cause for the seizure of the defendant vehicle,” said the documents. “The theft of the defendant vehicle from the manufacturer, as alleged in the complaint, occurred before claimant’s acquisition of the vehicle from a dealership and did not involve claimant.”
Mr Kachikwu was ordered to take the vehicle away from the U.S. within two months.
Mr Kachikwu, an ExxonMobil Nigeria executive at the time of the forfeiture, did not return requests seeking comments.
He was NNPC’s Group Managing Director between 2015 and 2016 and the Minister of State for Petroleum Resources between 2015 and 2019.