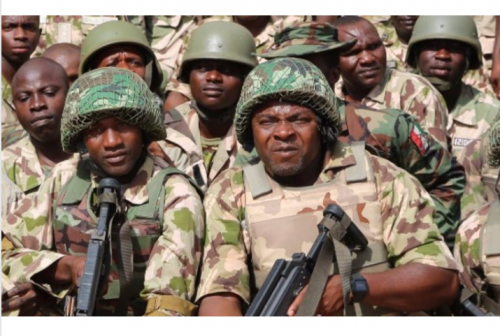 The Defence Headquarters has said troops of Operation Hadarin Daji Captured no fewer than 81 bandits, their collaborators and other criminal elements in the last three weeks across the North-West Zone.

The Acting Director, Defence Media Operations, Brig.-Gen. Bernard Onyeuko, made the disclosure while giving an update on the operations of the armed forces across the country on Thursday in Abuja.

Onyeuko also said that no fewer than 33 kidnap victims were rescued and 15 bandits killed by the troops during the period.

He added that two armed robbers were neutralised and 13 bandits’ informants arrested.

According to him, the troops sustain operations against the bandits, kidnappers and other criminal elements in the geo-political zone with attendant successes.

“Fifteen motorcycles and two AK-47 rifles were recovered; 33 kidnap victims rescued, 66 criminal elements arrested and some vandalised railway sleepers/tracks were recovered within the period,” he said.

Onyeuko said that the operations were conducted in various locations in Zamfara, Katsina and Sokoto States.

In North-Central, he said that troops of Operation Safe Haven arrested 20 persons involved in the killing of 26 travellers at Rukuba town in Jos North Local Government area of Plateau on August 14.

He said the suspects had been handed over to the prosecuting agency for necessary action.

Onyeuko said that the Chief of Defence Staff, Gen. Lucky Irabor, had visited Jos in his quest to ensure the return of peace to the state.

He disclosed that the CDS held a stakeholders’ meeting with Governor Simon Lalong, traditional rulers, religious and community leaders to discuss security challenges in the state.

“The discussions were largely successful as all stakeholders pledged their support for peace in the state.

“The Armed Forces of Nigeria remains steadfast in the fight against all forms of criminality in different parts of the country.

“The Military High Command appreciates the continuous sacrifices of the troops in the various theatres of operation across the country,’’ he said.

He said that the troops on Aug. 14 arrested nine cultists, who had been terrorising Utonkon community in Ado Local Government Area of the state.

He added that same troops acting on credible intelligence ambushed and arrested some railroad vandals and recover railroad tracks and sleepers at Tse-Guma village on August 15.

He said the criminals had been handed over to the appropriate agency for further action.