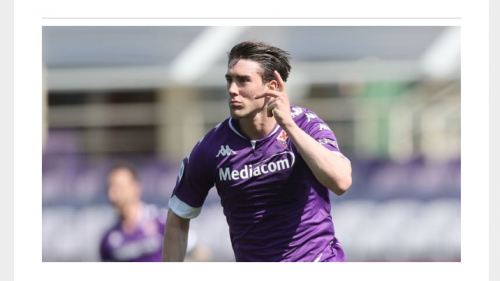 Tottenham Hotspur and Atlético Madrid are involved in a ‘real tug-of-war’ for Dušan Vlahović, according to La Nazione.

Fiorentina want to tie down the star to a new contract as soon as possible and include a €70m release clause, but the reality is more difficult because of interest shown by Spurs and Los Rojiblancos.

The coming days will be crucial to see if either Spurs or the Spanish champions would be able to make an offer close to €70m.

In order to lower the striker’s price tag, Atlético can offer Nehuén Pérez to La Viola, and he would ‘appeal to many’, most likely from the Italian club.

Fiorentina chairman Rocco Commisso’s ‘presence in Italy’ indicates there will be a definite decision soon.

It’s said Fiorentina are ‘not convinced’ with the €60m offer, including bonuses, made by Atlético.

The ‘high demands’ made by Commisso and Vlahović’s agent, Darko Ristic, are ‘driving away’ Atlético, and they have started looking at other options in the market.

Spurs are ‘strongly interested’ in the player and are ‘ready to present an offer’ close to the one they have presented for Inter Milan’s Lautaro Martínez. There’s no mention of the details of the proposal.

Fiorentina, for now, have identified Gianluca Scamacca as a potential successor to Vlahović, if the Serbian leaves the club. This indicates the Italians could cash in from the striker’s sale, should they receive an offer close to €70m.