SECURITY: COMMANDANT EWEKA RECEIVES AWARD OF EXCELLENCE AS THE MOST OUTSTANDING COMMANDANT IN NIGERIA SECURITY AND CIVIL DEFENCE CORPS FOR THE YEAR 2021 FROM CMC AFRICA – The Legend News 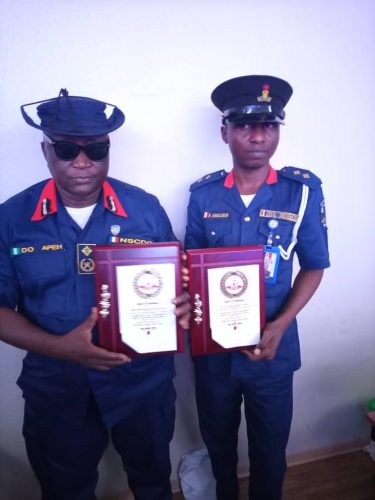 He avows his unflinching commitment to improving security in Lagos State.

The Commandant, Nigeria Security and Civil Defence Corps, Lagos State Command, Commandant Eweka Douglas Okoro, today Sunday, 26th September, 2021, was honoured as the ‘most outstanding Commandant in Nigeria Security and Civil Defence Corps for the year 2021, by the Cornel Media Consult ( CMC ) Africa Awards of Excellence at the Sheraton hotel at Ikeja in Lagos state.

The Commandant was graciously selected and invited by the CMC Gladiators group to receive the award, on the CMC Gladiators group’s 5th Award Edition, which had historically and remarkably the presence of media icons, government functionaries and legislators from across the country and people from different walks of life in the nation and abroad.

The Commandant was ably represented by Deputy Commandant Daniel Apeh, the Head of Department, Crisis and disaster management, NSCDC Lagos State Command, who gloriously and warmly received the award on his behalf.

Commandant Eweka was also honoured in conjunction with the Public relations officer of NSCDC Lagos State Command, Assistant Superintendent of Corps I ( ASCI ) Abolurin Oluwaseun Olumide as the most outstanding Public Relations Officer in Nigeria Security and Civil Defence Corps for the year 2021, in public speaking and image making amongst several array of successful stars, professionals, entrepreneurs, public servants and accomplished iconic personalities, from different walks of life.

Finally, the Commandant, seized the opportunity of the 5th Edition of the CMC Award Celebration, to sincerely, appreciate the convener and the founder of the CMC Africa Awards of Excellence and CMC Gladiators group, Ambassador Cornel Udofia and the organising and planning committee of the award for his invitation and selection for such an award at this significant time, in the annals of our nation’s history. The Commandant avowed his unflinching commitment to ensuring that the Nigeria Security and Civil Defence Corps, Lagos State Command, will continue to improve upon the existing and laudable security architecture of the state, by synergesing with the military, Police, security agencies and all relevant stakeholdrers and the good people of Lagos state, to ensure quality delivery of optimal safety, protection and security of lives and property.