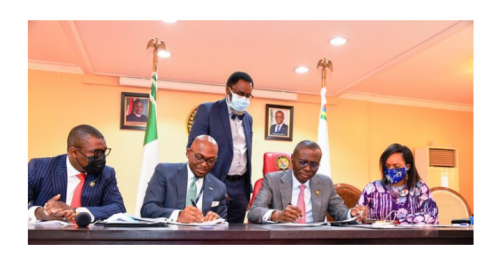 On Tuesday, Governor Babajide Sanwo-Olu signed a Memorandum of Understanding (MoU) with FMDQ Group and Financial Sector Deepening (FSD) Africa, which are the programme’s implementing partners on the proposed N25 billion (over $60 million) financing.

The historic event, held at the State House in Marina, came less than 24 hours after Lagos was upgraded to AAA(nga) rating from AA+(nga) by Fitch International for the State’s good standing on debt sustainability and resilience.

Sanwo-Olu said the green bond programme, which is supported by the UK Agency for International Development (UK Aid), would raise the capacity of the State Government to deliver more key infrastructure and social projects that would keep Lagos on the path of prosperity.

Launched in 2018, the Green Bond Market Development Programme is to facilitate the development of a green bond market to support broader debt capital markets reforms that will impact the sovereign and non-sovereign bond markets in the country.

The programme is to empower State Governments to champion sustainable finance for development. 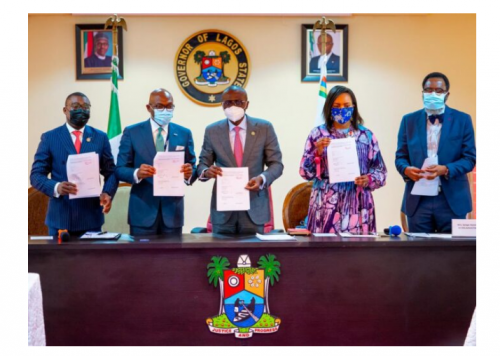 Sanwo-Olu said the MoU was the crucial first step being taken by Lagos towards creating viable financing option for future green and sustainability projects. The funding opportunity, he said, will advance the adoption of innovation and technologies to provide green jobs, thereby promoting economic and climate resiliency.

He said: “As a Government, we are committed to utilising our limited resources more efficiently to create a circular economy, which is a promising and viable alternative. Public spending and investments may not be enough to deliver our key objectives; therefore, the need to tap into more private investments for the transition to a zero-waste and circular economy, as well as achieving crucial items of the Sustainable Development Goals (SDGs).

“I strongly believe that the Green Bond programme will open the doors of deeply sustainable funds for infrastructure and social development for Lagos. Being the biggest player in the sub-national capital market, Lagos’ experience can open new doors for a lot of others. As a State, we embrace the transparency and commitment that comes with a Green Finance framework. We believe it sends an important signal to investors in the market about who we are: a State that is fiscally responsible, prudent and disciplined.”

Sanwo-Olu said Lagos’ credentials in investment sustainability made the State take the bold step to activate the framework to benefit from the programme.

He said the initiative would go a long way in ensuring that key deliverables in his administration’s T.H.E.M.E.S agenda are actualised while pledging that the State would continue to blaze the trail of leadership, financial accountability, innovation and sustainability.

Special Adviser to the Governor on SDGs and Investment, Mrs Solape Hammond, said the journey to get the framework approved started last year, disclosing that the MoU highlighted key projects to be delivered by the State Government to actualise economic sustainability.

She said the finance would be invested in green projects, adding the implementing partners had created a mechanism to ensure funds earmarked were disbursed judiciously.

Commissioner for Finance, Dr Rabiu Olowo, said Lagos had 20 years of experience in raising bonds, assuring implementing partners and capital market operators of the State’s commitment to the terms highlighted in the framework.

Chief Executive Officer of FMDQ Group, Mr Bola Onadele, said Lagos had built a reputation and “incredible potential” for catalysing broad-based sustainable development, which explained the partners’ readiness to support the State in unlocking the capital to fund key projects.

Also, FSD Africa CEO, Mr Mark Napier, saluted the Governor’s energy and his commitment towards providing infrastructure which future generations can rely on.

He said: “It’s truly a significant event that the economic powerhouse of Africa’s largest economy is signing the green bond investment and I can say this is leadership being demonstrated by the Lagos State Government. I expect other States to follow this path.”

The high point was the signing of the MoU by all parties under the supervision of the State Attorney General and Commissioner for Justice, Mr Moyo Onigbanjo, SAN and witnessed by the British Deputy High Commissioner, Mr Ben Llewelly-Jones.