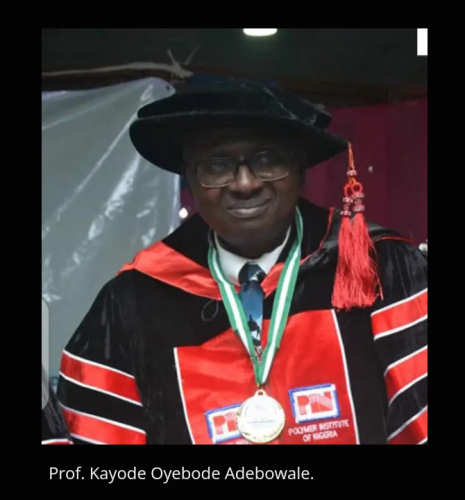 Adebowale’s candidature was ratified by the UI Council led by Chief John Odigie-Oyegun on Thursday, October 14, 20211
Adebowale becomes the 13th VC of the over 70-year-old institution.

Professor Kayode Oyedode Adebowale was born on  January 11, 1962. He completed his BSc, MSc and PhD programmes at the University of Ibadan, Nigeria. He became a Professor of Industrial Chemistry in 2006.

He had postdoctoral experience at the Ebehards Karls University, Tuebingen, Germany and the Abdus Salam International Centre for Theoretical Physics, Italy. He has won several accolades which include Fellow, Nigeria Academy of Science, Polymer Institute of Nigeria, Chemical Society of Nigeria and Science Association of Nigeria. Outside the shores of Nigeria, Fellow Royal Society of Chemistry, Alexander von Humboldt Stiftung and lately, African Academy of Science.

Professor Adebowale has a track record of distinguished research and service and he is currently researching Applied Chemistry (Industrial Chemistry). Professor Adebowale has published widely in both national and international journals of repute and has served as an external examiner in Nigeria and beyond. To date, he has published over 130 research articles and a national patent. On Google scholar, he has an H-index of 40; On Scopus an H-index of 35.

He has mentored several Bachelors, Masters, and fourteen Doctoral students who are distinguished scholars in their respective institutions in Nigeria and abroad. He is the Chairman of the Chemical Society of Nigeria (South Western Region).

He has won a research grant from the International Foundation for Science IFS, Sweden. He is a recipient of the prestigious 2013 African Union Kwame Nkrumah Continental Scientific Award in Science, Technology and Innovation. He has attended the Senior Executive Course of the National Institute of Policy and Strategic Studies leading to the award of Member of National Institute, mni. He is currently the Deputy Vice-Chancellor (Administration), University of Ibadan, Nigeria.

Professor Adebowale is on the International Scientific Advisory Board of the African Centre of Excellence for Water and Environmental Research (ACEWATER). He is currently involved with the Nigerian Young Academy, where he supports two national awards for young scientists one of which is for distinguished young women in Chemical Sciences research.

He is married to Dr Yemisi Adebowale and they are blessed with three children.