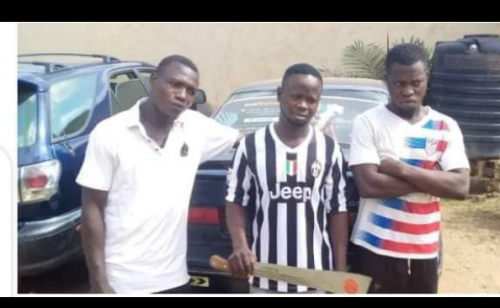 A father Abidemi Oluwaseun got angry after his 15 Year old daughter told him she was punished by one of her teachers . He got in touch with two of his friends and they drove out in a frenzy . Their destination was the Baptist Girls College Idi Aba Abeokuta. Their mission was to teach the teacher a lesson . Of course they came well armed and they descended on their target and other teachers . Hell was let loose. The three men brought out a new Cutlass and threatened to hack down the teacher .
Before long words got to the Ogun State Police Command which promptly sent armed policemen to the scene to arrest 37 year old Oluwasenun and his friends, Fayesele Olabanji, 25, and Alebiosu Quawiyu,24.

The Police statement on the incident issued
The Police Public Relations Officer in the state, DSP, Abimbola Oyeyemi

“Upon the distress call, the DPO, Kemta division, CSP Opebiyi Sunday, mobilised his men and moved to the scene where the three men were apprehended in the school premises. The unregistered Toyota car and the cutlass were recovered from them.
Preliminary investigation revealed that the suspect’s daughter was beaten because while the teacher was teaching, some of the students including his daughter were mocking the teacher and distracting other students.
The teacher after identifying those disturbing the class flogged them as a corrective measure, but the suspect’s daughter went home and reported to her farther consequent upon which her father mobilised two thugs and stormed the school with cutlasses.
On interrogation, Abidemi Oluwaseun confessed to hiring the other two men to the school to teach the teacher who beat his daughter a lesson of his life.”