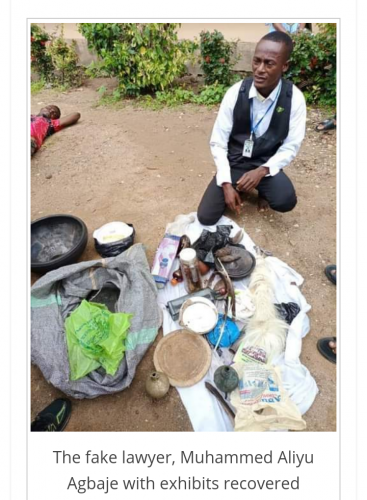 Parading the suspect before journalists on Saturday, Commissioner of Police in the state, Olawale Olokode, said Agbaje appeared at the commissioner of police’s surveillance station on August 4, at Obelawo area of Osogbo, the state capital, to represent and seek for the bail of a suspect who was arrested for the offence of ‘threat to life’.

Olokode stated that the fake lawyer claimed to have come from the chamber of one Barrister Adeleye in Ibadan.

The CP said Agbaje, who resides at Owode Ede area of the state, was detected to be fake.

He added that operatives of the command searched the suspect’s residence and recovered some exhibits.

According to the police boss, the suspect confessed to have been duping unsuspecting members of the public while claiming to be a legal practitioner.
Olokode noted that he will be charged to court after investigation.

Muhammed, speaking, said, “When I was doing a programme on the radio, I met a man who promised to give me an Identity card. I dropped out in the faculty of law, University of Ilorin. I don’t have money to pay for my school. I used my school fees to buy a motorcycle when my father and brother died.

“One Adeleye who is a human rights lawyer issued an identity card for me after collecting N100,000 from me. He promised that he will attach me with someone.

“I have never gone to defend any matter in court before because they have not called me to bar and never finish school. I have never attempted to bail anyone before. I am 35 years old, I have one wife and two kids I dropped out in Unilorin in 2012. I am also a traditionalist, I believe in Ifa oracle.”