OUR LIVES UNDER SIEGE BY ARMED ROBBERS-RESIDENTS OF ABIODUN OLAJIRE STREET,IKORODU- The Legend News 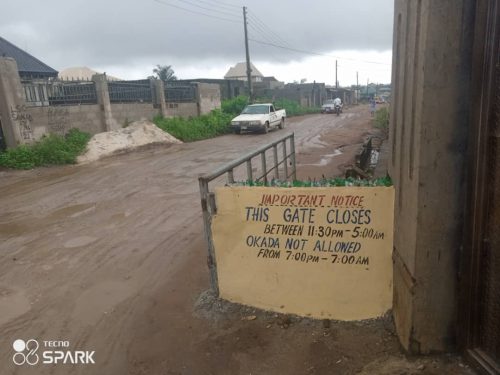 SAVE OUR SOULS (SOS)
ABIODUN OLAJIRE STREET IS NOW UNDER SIEGE

Residents of Abiodun Olajire street wrote a petition to the  Commissioner of Police
Lagos State Police Command on the increasing robbery attack.

We Residents of aforementioned community wish  to formally bring to your attention the increasing menace and activities of armed robbers in Abiodun Olajire Street in Ewu-Owa, Gberigbe, Ijede division, Ikorodu.

In the last sixty (60) days sir, Ewu-Owa has witnessed not less than 7 major armed robbery/burglary incidents most of which occurred at Abiodun Olajire Street; and subsequently reported at Ijede Divisional Police Headquarters in Ijede.

The community recorded the first robbery case since Abiodun Olajire Street in Ewu-Owa, Gberigbe has remained a major link road to Gberigbe due to deplorable Gberigbe Road on the 24th day of June, 2021 at about 12. 00a.m – 1. 00a.m. A 4-man gang invaded Mr. Agunbiade Odunola’s house and the next building to him in Imam Street both in Ewu-Owa where they successfully carted away cash, phones and other valuables including a Toyota Camry car. 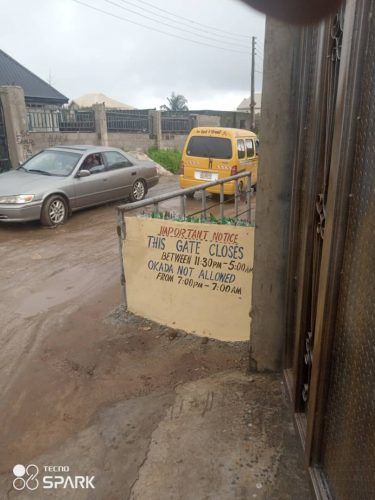 Seven (7) days after sir, Olajire Street witnessed the second attack on the 30th June /1st day of July, 2021, our street was invaded by 4-man gang, over-powered our security guard, tied him before beating him mercilessly. Thereafter, extended their heinous activities to the residents of Olaife Estate (an adjoining street) carted away cash, laptops, phones and other valuable properties, houses were raided unchallenged with successful operation before the arrival of Police team from Ijede.

On the following week sir, precisely on Thursday, 3rd day of July, between 11.30pm – 12. 00a.m, a 12-man gang invaded our street (Abiodun Olajire Street) with four (4) motor-cycle (Okada) three on each bike they looked fierce and had dreadlock hairstyle. They should be in their early 20’s. Owing to their numbers and though disposition; we (landlords and the security operative) could not confront them. However, it should be stated that due to the number of landlords outside that day to support our security guards, they (boys) only dismantled our barricades and left without causing any harm to our community but we later heard that the gang attacked a mini-bus (popularly called ‘korope”’) along Mowo-Nla/Ewu-Owa Road immediately they left our street that day. 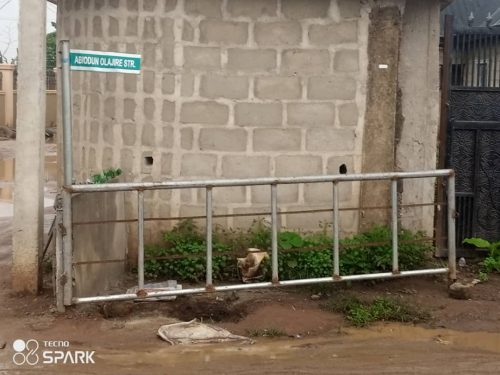 On Friday, 24rd July, 2021 around 1. 00a.m in the midnight, some men suspected to be smugglers/bandits well-armed accessed our street, escorting a white Mitsubishi Pickup with three (3) bikes, 3 on each bike while the occupants and contents of the vehicle were not known. We shivered on sighting them but they told the landlords and security guard on duty that day that they did not come for us, hence passed unchallenged. Sir, if they have come for us, only God could have saved the street that day.

On the 31st day of July, 2021, there was another attack on the street followed by a gunshot by the attackers right in front of Mr. Abiodun Olajire’s residence (former CDA Chairman) around 3. 30a.m to 4.00a.m. which lead to our security guard resigning when it became obvious that he could not stand the unceasing attacks.

On the 8th August, 2021 around 11. 20p.m, another attempt to steal a Toyota Sienna 2004 model space bus parked in the owner’s compound was aborted by our vigilant security guards with the support of some landlords, also in Abiodun Olajire Street.

Despite all the aforementioned sir, on Thursday, 12th August, 2021 another resident in person of Mr. Adewale’s house was invaded in the early hours between 3. 00a.m – 4. 00a.m but for the timely intervention of our gallant new security guards from Agbekoya Security Outfit headed by one Mr. Ade, the attackers were repelled while their operations aborted all in Abiodun Olajire Street sir.

It is also imperative to mention sir, that Ewu-Owa has been known to be peaceful and never experienced this type of anomalies, until when Abiodun Olajire Street became a major link road to Gberigbe. Moreso, several other pockets of incidents also occurred in the area which are too numerous to mention in this letter, among which include; snatching of phones, bags most especially early in the morning etc.

Since our Street is one of the major links to Gberigbe, and as part of our own little efforts to confront the menace of this unprovoked and incessant attacks on our Street, we have engaged the services of Agbekoya Security Outfit and also partnering with some neighbouring community to further secure our street and area.

Further to this sir, two gates has just been constructed and installed on the two entrances to the street which is now been closed between 11. 00p.m and 5.00a.m. while each gate is manned by security guards.

Since our street serves as one of the major link roads to Gberigbe from Ikorodu, this has greatly exposed and make the street vulnerable to attack; consequently, we are requesting for a patrol vehicle to be stationed in the Street or a special security patrol for Ewu-Owa due to the heavy traffic experiencing in the area as a result of deplorable state of Gberigbe road through One-folds bus stop.

We are requesting immediate stoppage or banning of activities of touts that extorts motorist and bikes at the entrance of the street (Abiodun Olajire Street) as they too are constituting nuisance and could cause a security threat to the area.

Conclusively sir, we shall be glad if our prayers are given a speedy consideration and approval.