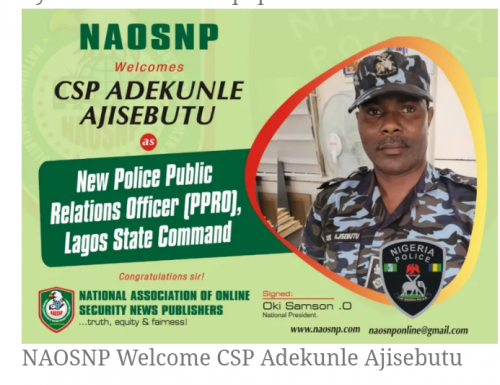 CSP Ajisebutu’s appointment was announced on Friday by the immediate past Spokesperson of the Command, CSP Olumuyiwa Adejobi, following recommendations based on positive service records and meritorious endeavours for public good.

Ajisebutu replaced CSP Olumuyiwa Adejobi who had been promoted and transferred to the Force Public Relations Department, Abuja.

A statement signed by the Association’s Public Relations Officer, Mr Eric Elezuo, quoted the National President, Mr. Samson Oki as pouring encomiums on the cop, whose antecedents in the force smacks of positivism with track records of intelligence and public engagements, adding that the Association welcomes the cop with gladness and pledges their continuous support while he performs his duties.

“It is on record that the Lagos Command has never lacked dutiful and diligent officers at the helm of its public relation desks, and CSP Ajisebutu is no exception. We are so blessed to have him as the PPRO at this time in Lagos State. There is no doubt that Ajisebutu is bringing his wealth of experience in various fields of policing to give the PR desk the best of shots,” Oki said.

“We welcome you sir, and be rest assured that our association, NAOSNP, well known and reputed for covering and reporting the Nigeria Police, research and fact-based security stories, will stand by you, and give you the needed full support in the discharge of your duties,” he added.

The new spokesman was enlisted into the Force on Sept. 1, 1988, and was the second-in-command, Area E FESTAC Area Command, Lagos State, before his new posting.

CSP Adekunle Ajisebutu is an Associate Member of the Nigerian Institute of Public Relations (NIPR) and member of the International Association of Chiefs of Police.