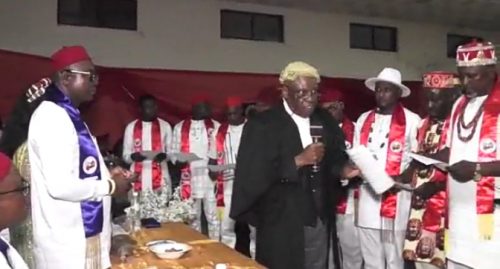 INAUGURATION: From Left: Chief Sir Chigozie Kingsley Obi, Ezekwukunaeziokwu I, Chairman of occasion, performing his duty of presenting awards to awardees, during the inauguration ceremony of Ohanaeze Ndigbo General Assembly Worldwide, being administered an oath of allegiance in Kano, on Sunday 26 September, 2021.

*Ohanaeze Ndigbo is one in Nigeria, US – Obizoba

*We have intervention to improve welfare of members – Harriet Chimezie

In its unrelenting effort to reorganize the Igbo community in the South East, across the states of Nigeria and globally to begin a new life as a people with love for one another and their country Nigeria, the Ohanaeze Ndigbo General Assembly Worldwide, under the President-General, Barr. Basil Onyeachonam Onuorah, has inaugurated its state executive council in Kano State, North West Nigeria.

This inauguration took place on Sunday 26 September, 2021 at NITEL Training Centre, Fagge area of the nation’s second largest economy. The ceremony, attended by notable Igbo people and top business magnates from across the state, was a landmark as dignitaries from other tribes and faith, mainly Muslims, Hausa and Yoruba, were also present.

It will be recalled that Ohanaeze Ndigbo General Assembly Worldwide’s mission for the same reason of repositioning for the good of Igbo people within the united Nigerian nation and successful transformation of the country for better, received a boost on Sunday 23 May, 2021, when the inauguration of its executive council was held in the Nigeria’s largest economy of Lagos.

Kano’s inauguration is more unique as the Eze Ndigbo, who is also a member of Kano Emirate Council and member Gen. Abdulsalaam Abubakar-led National Peace Committee, not only welcomed and supported the inauguration but also seized the opportunity of the event to collapse the old Ohanaeze Ndigbo group members into the new and now constitutionally recognized Ohanaeze Ndigbo General Assembly Worldwide.

By so doing, Igbo are now one indivisible people in Kano State and Ohanaeze Ndigbo is one body under the state executive council overseen by the Basil Onuorah-led national leadership.

Chief Sunday Okafor, Obataobie I, was sworn in by the National Legal Officer, Barr. Amobi Nzelu, as President, Ohanaeze Ndigbo General Assembly worldwide, Kano State Chapter, along with other members of his state executive council during the inauguration of the team generally believed to be capable of delivering well, considering the successes known with the new state President.

Speaking during the event, the Director General, Strategic Planning and Implementations, Amb. Tony Chiemelu Obizoba, made the Igbo people in Kano, who were present in their large number, to know that they now have an Igbo socio-cultural organization that will not only represent the people well but will also be accountable and transparent.

The Igbo on ground at the inauguration were told by the director general, “That Ohanaeze Ndigbo, which was first established in 1970, remains one and the same.

He said the ONGAW is for one united Nigeria and that it is not out to operate as a different Ohanaeze Ndigbo but to now reposition the decades old ethnic nationality as a legally recognised group.

The DG said Ohanaeze Ndigbo that was established in 1970 was never accounted for and that all the billions it had been taking had no record either with Corporate Affairs Commission or any bank but that henceforth, not only the national but also every state chapter including Kano that has just been inaugurated would account for every naira and kobo it collects.

Amb. Tony Chiemelu Obizoba announced to the gathering that Ohanaeze Ndigbo General Assembly Worldwide is recognised even abroad as it is also registered in Washington D.C. known to the law and government of the United States of America, while arrangements, he said, were in top gear for its inauguration in Canada, soon.

Director General South East Economic Development and Infrastructure, Engr. Harriet Ada Chimezie, announced a palliative of 100 packaged bags of rice for identified women in needs, while assuring the Igbo in Kano that Ohanaeze Ndigbo is also out to intervene at every stage of need of the improved welfare of members across the country and beyond.

In a press interview after the event, Chief Obi, asked to expatiate, said: “Kano has favoured Igbo people. If you look around within the Fagge Local Government, you will see it is all Igbo, the whole houses are all Igbo. Formerly, we used to know that you don’t live out of Sabon Gari. But today, it’s no more like that as Igbo have moved out of Sabon Gari.

“There is now a new Sabon Gari called jebba. The indigenes, Hausa call the place New Abuja. If you go there you see a great development. There is a lot of layouts newly created and occupied by Igbo. Here a plot of 100 x 50 land sells for N120 million and Igbo have occupied the whole area. If we are not favoured, it won’t be like that. So, Igbo here in Kano are favoured”, he said.

Chief Chigozie Obi said he has moved around Nigeria and across the North and has seen that no part of the North is more developed and progressed than Kano.

He dismissed the wrong notion being given in the media about the North with regards to their relationship with people of other regions, tribes or faith.

“The negative news you are normally told regarding Northerners’ relationship with Southerners or none indigenes here is not true. The way you hear the news is not the way it is”, he said.

He cited the case of his parents, who had been afraid of visiting Kano because of news the media of Southern Nigeria fed them with until they came to spend one month before returning last Monday 21 September, 2021 and that his father said: “So, the news we are told about the North and Kano is not true.”

Chief Sunday Okafor, asked how he emerged President, said it might be because of what people say about his good records where he had held positions of leadership.

“It is hard work and prayer to God, with sincerity and transparency. In every polity, if you are transparent and you don’t discriminate, you will excel. Today you would think the event was of Hausa or again of Yoruba the way they turn out because of my good relationship with indigenes and tribes. And one thing that makes one excel is accountability. Ohanaeze Ndigbo is an umbrella body that holds all the Igbo together and ensure goodness towards others.”

“We must extend our sincere gratitude and happiness to His Excellency Governor Ganduje for the good work he has been doing in Kano. I am saying this without mincing words that in the whole nation, it is only in Kano that people can sleep with their two eyes closed. We have absolute peace here and it is as a result of the good work of the governor, assisted by all the heads of security agencies and the armed forces in the state.”

Okafor concluded on the note that he would run a leadership based on sincerity, transparency and accountability as President of Ohanaeze Ndigbo General Assembly Worldwide Kano State Chapter.

Awards were given to contributors of peace, unity and progress to the society as well as people who have helped advance the cause of the Igbo socio-cultural organisation. They included Amb. Yahaya Muhammad Kyabo Fagge, Mr. Joseph Mba, Managing Director, Royal Park Hotels and Suites who has 400 workers on his staff strength, Mr. Joseph Nwogo, and Engr. Harriet Ada Chimezie, among others.