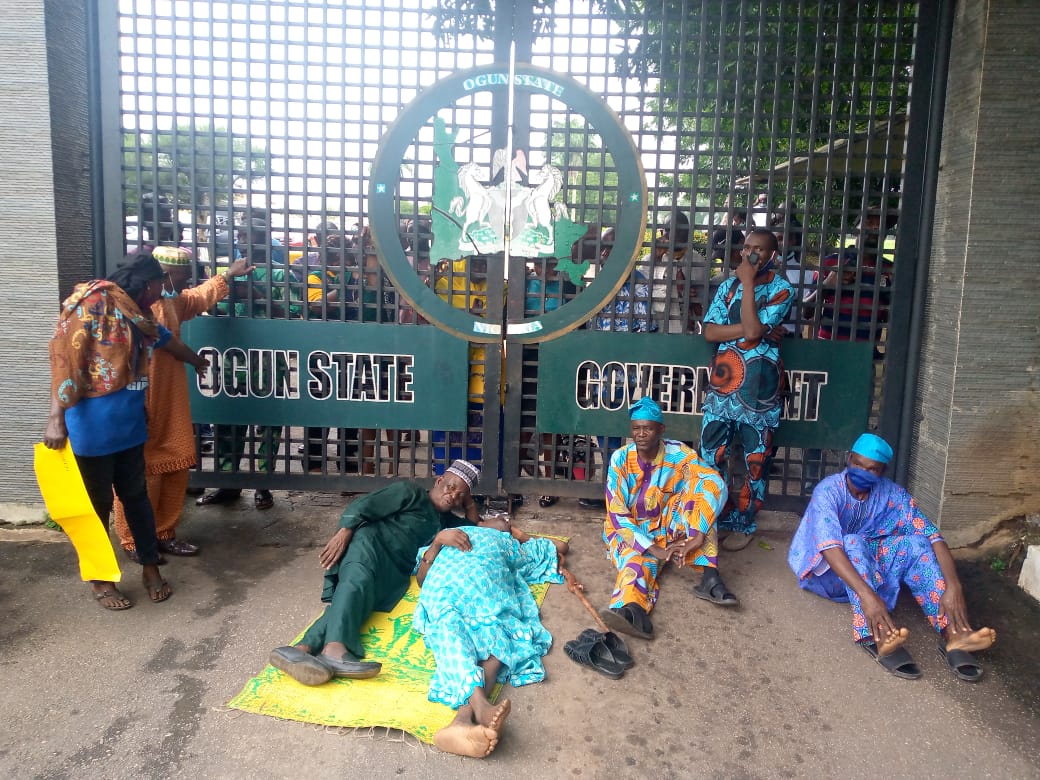 Pensioners in the Ogun State’s 20 Local Governments on Wednesday barricaded the two main gates to the Governor’s Office at the State Secretariat in Oke-mosan, Abeokuta, in protest against the non payment of their outstanding gratuities for the past10 years
The retirees protesting under the aegis of Local Government Pensioners Association of Nigeria (LOGPAN), Ogun State Chapter, defied rainfall,destrupting both human and vehicular movements between the IBB Boulevard Road in Ibara near NNPC Mega filing station and Oke-mosan axis of the road which lasted for four hours 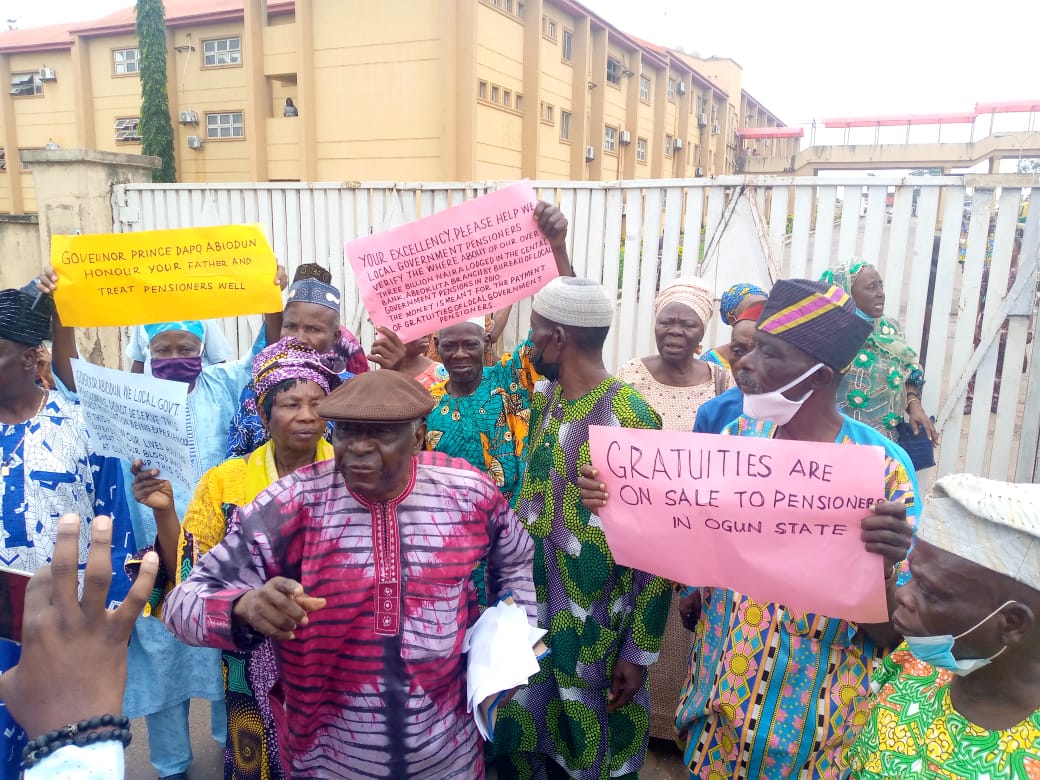 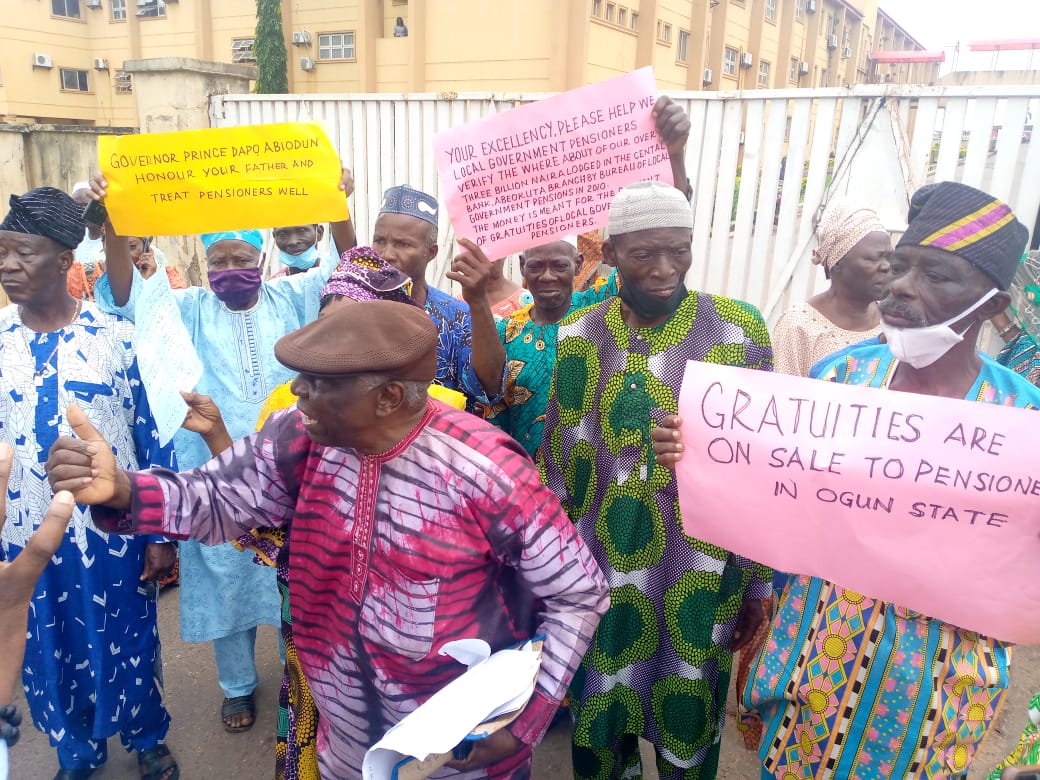 Their demands includes, non payment of pensions since 2011, late payment of monthly pensions, payment of gratuities, reviewed of monthly pensions, resuscitation of board of bureau of local government pension and the opening of communication line with the governor among others.
Chairman of the association, Chief Sikirulai Ayilara addressing newsmen lamented that Governor Dapo Abiodun had failed to honour all treaties extended to him, thereby making the protest inevitable.
“We have written 13 letters to the Governor through various channels without response. We had informed all security apparatus in the state: DSS, Commissioner of police, Commandant of NSCDC, SSA on security matters to the Governor. They all intervened without any positive response from the Governor.”he stated
“We had informed all the four paramount rulers in the state with no result. We had held six meetings with the SSG, Chief of Staff, Head of Service, Commissioner for LG and Chieftaincy Affairs, among other notable government officials”, Ayilara added
“Governor Abiodun should honour us; grandfathers and grandmothers and direct his personal attention to us for us to meet and find lasting solution to the inhuman treatments being meted to us at our old age, leading to untimely death death among us after serving the state for between 10 and 35 years”.
“We demand immediate harmonisation of the pensions. We demand regular payment of our pensions as it was”, he insisted.
Reactiing to the protest,Secretary to the State Government (SSG), Mr Tokunbo Talabi appealed to the protesters, calling for peace,
Talabi who was accompanied by Commissioner for Local Government and Chieftaincy Affairs, Hon. Afolabi Afuape, Commissioner for information, Alh. Waheed Odusile and other government functionaries, assured the pensioners that government would address all the issues raised, describing the protest as their legitimate right
He promised that members of the pensioners would be involved in the process of finding solutions to the issues raised.
the state government and the joint Labour Union Commitee of the Nigerian Labour Congress (NLC) and the Trade Union Congress (TUC)  signed a Memorandum of understanding (MOU) which agreed  that the State government would pay 500 million naira quaterly to offset the outstanding gratituties and pensions.
Edu- Buz
Categories: Breaking News, Headlines, Metro | Comments
Upcoming Events