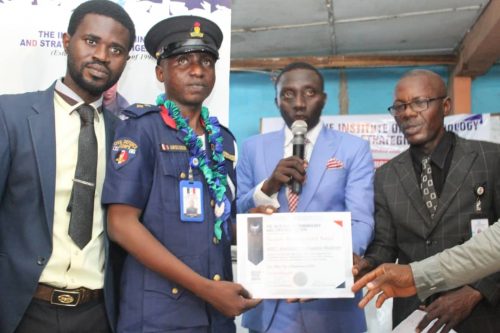 He avows his unflinching commitment to continue to properly manage the image of the Corps excellently well in Lagos State and beyond.

The Public Relations Officer was graciously selected and invited by the Institute to receive the double honour of Fellowship and Security Ambassadorial Award, workshop and conferment of awards’ event. The institute specially honoured five members at the event today with the Security Ambassadorial award, whilst the (PRO) received double awards at the workshop.

The Public Relations Officer presented a paper on the topic : ‘Community and Public relations veritable tools in efficient intelligence gathering in the Nigerian security system,’ at the workshop and conferment of awards today.

The Public Relations Officer seized the opportunity of the workshop and conferment of awards to sincerely, appreciate the Almighty God for this great privilege. He also thanked the Chairman – in – council of the Institute, the Former Commandant – General Nigeria Security and Civil Defence Corps, CG John Adewale Abolurin rtd, Phd, psc (+), OFR most profoundly for his unbeatable leadership qualities, the Registrar – General Dr S Aderemi Adekunle and the entire Management and Board of the institute, for selecting him as suitable for the double awards.

Finally, the Public Relations Officer, NSCDC Lagos State Command, ASCI Abolurin Oluwaseun Olumide who also thanked the Commandant, NSCDC, Lagos State Command, Commandant Eweka Edenabu Douglas Okoro, for his laudable support, dedicated the award to God and his family. He further avowed his unflinching commitment to ensuring that the image of the Nigeria Security and Civil Defence Corps, in Lagos State Command and beyond will continue to be well managed under his supervision.