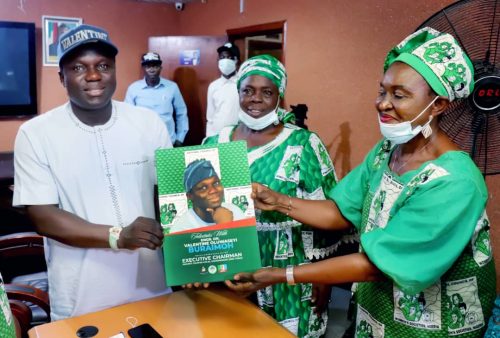 The women were on courtesy visits to the two local councils recently to congratulate the chairman of Amuwo Odofin, Engr. (Dr.) Valentine Oluwaseyi Buraimoh and his counterpart in Oriade LCDA Hon. Ramotalai Akinlola-Hassan on their victories in the last local government election in the state.

Both Buraimoh and Akinlola-Hassan are Patron and Matron of the NCWS Amuwo Odofin chapter.

The group, led by the First Vice President, NCWS, Lagos State Chapter, Alhaja Memunat Ajao, congratulated the two Executive Chairmen for winning their second term tickets to the office and prayed that God will see them through the second term, adding that they should continue to always remember women in their day-to-day activities.

Amuwo Odofin LG boss appreciated the visit and the support of the women toward his administration in his first tenure in office, even as he promised them that he would do more in this new dispensation. He called on the women group to always remember him in their prayers because “they are mothers of the nation.”

At Oriade LCDA, Hon. Akinlola-Hassan said as a woman they should expect more from her, as she would leave nothing to chance to ensure that the cause of the women is protected in her administration.

The NCWS is the umbrella body of all women Associations in Nigeria. A non-governmental, non-profit and non-partisan society, founded over 60 years ago. The goal of NCWS is to improve the welfare, progress and standard of living of women in Nigeria, and to increase the roles of women in governance.