MORE ON THE ‘SWAGALICIOUS’ TINUBU PROMOTION FOR 2023.- The Legend News 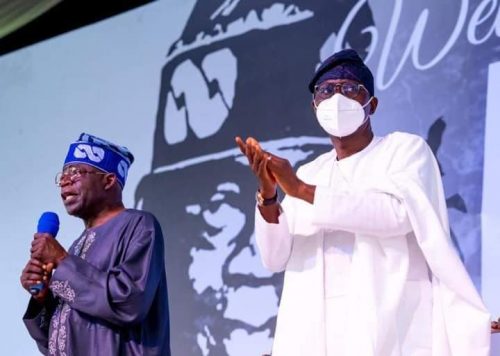 MORE ON THE ‘SWAGALICIOUS’ TINUBU PROMOTION FOR 2023.- The Legend News

Tinubu is not in politics, because of your own interest and ambition in it, but because of himself.

He is in politics to become what he wants to become in it and in government, when the opportunity beacons to serve you; his mission for participation and his vision for the governance he aims to form as well at the end of the day or someday.

If he is in government and does not serve your interest well, that is when he should be accused, blamed or attacked, but not why he is in politics or when he has not been voted for to serve.

This is the fact of the matter.

It is his right to participate for involvement in politics and your right to expect him to serve you well in government.

Tinubu can contest to be the president of the federal republic of Nigeria in line with his own interest and ambition as well as the established laws of the country.

It is his right to continue to seek to be so, like other policians, who we all know cannot also be as perfect as a lot of Nigerians expect them to be.

Politics is not the business of the saints. It is so peculiar in the sense that, if Pastor Adeboye of the RCCG or Bishop Oyedepo of the Winners chapel go in there to contest as holy and as ‘perfect’ as many Nigerians think they are, they may not even win the votes of the majority in their states.

Tinunu is in politics, because of himself, not because of you or the opinions you have about it, because that opinion might not be strong enough to stop him from getting the numbers he needs to get into government.

It is his fundamental human rights to continue to seek to be great in it and to be anything he wants to be in it. And, that is what he has been doing in the political system like others in his league – To continue to be actively involved, relevant; promote his intrest and achieve his aims in it.

If President Buhari, Atiku, Saraki, Osinbajo, Tambuwal, Wike, Fayemi and co. can be, he should be left alone for his party and Nigerians to decide his fate through their votes on the day of probably the coming elections.

Politics is a social enterprise. It is a free space for everyone to participate and get involved in it. It is the business of everyone in the public premise.

Tinubu is not stopping you or anyone not to be in it or sell himself for good promotion and acceptance in it. Nobody is stopping anyone from operating to be like Tinubu, Atiku or Buhari. It is all about your own intrest.

It all depends on the level of your own involvement; time, money, mental capacity and ability resources to organize people for acceptance as well as your own physical ability to mobilise, maintain and sustain the clout and the people for great followership.

If you can also do it and be active or be relevant in it like Tinubu, why not?!

He is not stopping you from participating and growing your own greatness in it. So, it shouldn’t be a crime to some Nigerians for anyone to build his own political clout like him as well.

As I said, it is a free and voluntary enterprise and a premise to operate the way it would make you achieve your aim in it.

Tinubu, over the many years, has been working so hard with great interest to promote his own purpose for playing in the game of politics to keep winning the power to form governments and also fixing his own loyalists to run it in line with his school of politics and progressive ideology.

Why can’t you also get involved; join a political party or form your own and promote it with your own personal resources the way he, like others in the system, have been doing it for your own gains and greatness as well.

If you know Atiku, Saraki, Buhari and others are your preferred choices in political leadership, and you know they are not also as perfect and saintly as you want Tinubu to be in it, then it is the right of Tinubu also to continue to build it for his own greatness and for the purpose of whatever he intends to achieve in it.

The business of contesting elections to run public office is about the provisions of the extant electoral laws of our country for all Nigerians, it is not a family chieftaincy rights or business. It is about public office runnership, which is the right of anybody. It is the right of any Nigerian, who has the intrest and ambition to be anything good in it to continue to participate in it.

If it is the rights of others to contest for elections to achieve their aims in it, then it is his right as well to express his intrest and mobilise Nigerians to accept his aspiration and continue to work for him to actualize it.

It is his right to do so, and it is your own right too to decide to reject or accept him at the polls.

Politics is not a business of the perfect, blameless or saintly citizens in any country.

That is why it is not in the definition of democracy that it is only the angels or the perfect people that should offer themselves to serve the country at the level of governance.

Democracy only says it should be the governance of the people; by the people and for the people. He doesn’t necessarily have to be a perfect man or woman for as long as he can govern to make the society good and happy on the long run.

But, not only the opportunity for angels or the saints in the society.

If you feel Tinubu is not good for your choice, then hold your peace until the day of election.

If, at the end of the day, he is not able to get the required number, then the law would not force him to rule on you.

But, for you to be looking for that perfection in his aspiration, you cannot get it from any aspirant. Because, no human being is perfect – even Adam and Eve were not.

However, democracy is so funny and peculiar in the fact that even if the devil comes out to contest to form government in Nigeria today, he might win with a land slide.

Little wonder, and as I know, Nigerians hardly really operate and vote, where the virtues and values of electoral choices are, but where the personal opportunities and money to be made are inherent on the day of election.

‘Perfect’ Nigerians may not have all the big money and saintly political parties may not be able to produce that saint and perfect leaders you desire.

If you say Tinubu is not good for you, I can also say your own preferred choice is not better as well.

Abi no be Nigeria all of us dey!”