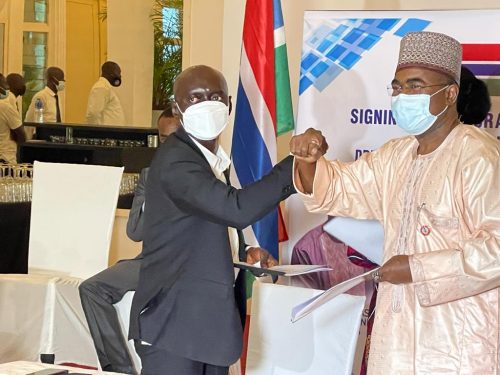 Chairman/Chief Executive of the National Drug Law Enforcement Agency, NDLEA, Brig. Gen. Mohamed Buba Marwa (Retd) has harped on the need for regional and international cooperation to successfully cut off drug supply to the rising criminal gangs across the world.
Gen. Marwa stated this on Wednesday 4th August, 2021 in Banjul, the capital city of Gambia while speaking at the signing ceremony of a Memorandum of Understanding (MoU) between NDLEA and Drug Law Enforcement Agency, Gambia (DLEAG), which borders on cooperation in combating illicit production, manufacture, and trafficking in narcotic drugs, psychotropic substances and their precursors.

He said nations across the globe are daily grappling with the challenge of drug-induced crime and criminalities, and as such must forge a common front to confront the evil twins of drug trafficking and abuse. He expressed optimism that the collaboration between Nigeria and Gambia on drug war will ginger similar partnerships among other countries in West Africa and on the African continent.
According to him, the MoU is in furtherance of the affirmation and commitment entered into between the Ministers of Justice of the two countries at the 62nd session of the UN Commission on drug in Vienna, Austria. He said “the commonality of English Language between us and shared colonial history, heightened by our cultural affinity and business transactions in addition to statistics on drug abuse in West Africa calls for urgent need for collaboration. 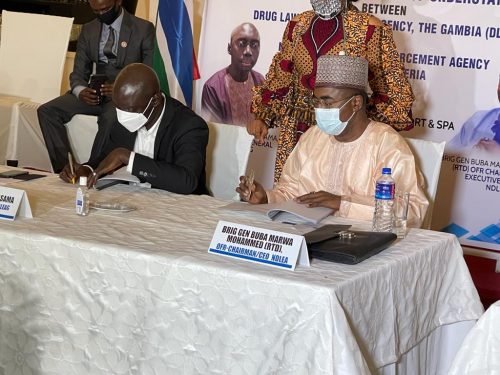 We in the NDLEA are prepared to collaborate with the sharing of intelligence, operations and any other area that will help to effectively combat illicit drug trafficking between our two countries.”

Speaking earlier, the Director General of DLEAG, Alhagie Bakary Gassama commended the proactive leadership of Gen. Marwa and its impact on NDLEA since he assumed headship seven months ago. While emphasising the need for partnership and intelligence on drug interdiction efforts between the two agencies, Gassama said such would benefit both countries and the African continent. 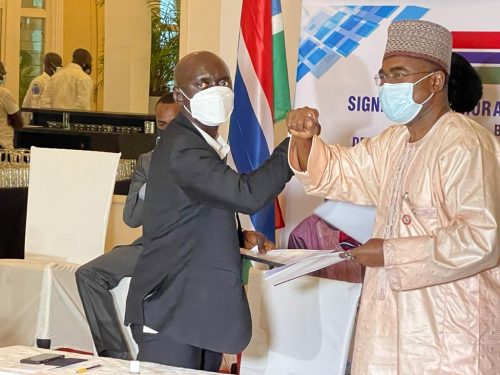 Also speaking at the event, the Gambian Minister of Interior, Yankuba Sonko commended the initiative between NDLEA and DLEAG, stressing that such will in no small boost law enforcement operations against drug trafficking in Africa and promote law and order in the two countries.
Present at the well-attended ceremony were Nigeria’s Ambassador to Gambia, Mohammed Manu and Heads of various law enforcement and intelligence agencies in the Gambia, among others.