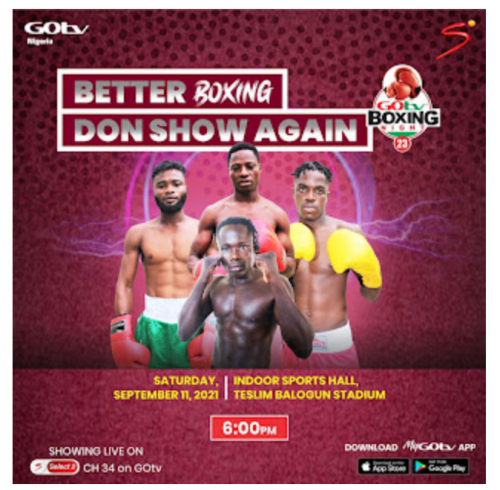 The 23rd edition of the GOtv Boxing Night, scheduled to hold on Saturday, September 11, will be broadcast live on DStv and GOtv

This edition will stage seven fights across weight categories with a total of 12 boxers on the domestic scene and two from abroad hoping to walk away with the N1million cash prize attached to the Mojisola Ogunsanya Memorial Trophy for the best boxer at the event.

GOtv Boxing Night 23, which is scheduled to hold at the Molade-Okoya Thomas Indoor Sports Hall of the Teslim Balogun Stadium in Lagos, will be aired live on SuperSport Select 2 (GOtv Channel 34) and SuperSport Variety 4 (DStv Channel 2019).

Speaking on the event, John Ugbe, CEO, MultiChoice Nigeria, said that GOtv will continue to be the biggest supporter of Nigerian boxing and the continuity of the boxing event has not only rekindled interest of talented boxers and fans but also kept boxing authorities engaged.l

“The 23rd edition of the GOtv Boxing Night is a testament to our commitment to the growth of boxing in Nigeria. We are very proud of this initiative that has not only produced sub-regional, continental and international champions across weight categories, but also rekindled interest in the boxing sport” he said.

Among those who will be in action are previous winners of the best boxer prize. They are reigning World Boxing Federation (WBF) champions, Rilwan “Baby Face” Babatunde and Rilwan “Real One” Oladosu, both of whom have won it twice and are itching to win again. The two Rilwans are billed to fight boxers from Ghana and the Republic of Benin, with each of the foreigners also expressing a desire to return to his country with N1million in addition to the boxer’s purse.

There is also the hugely ambitious Isaac “I-Star” Chukwudi, who will attempt to win his first title when he faces incumbent national welterweight champion, Taiwo “Joy Boy” Olowu.

Baby Face, who recently fought in the Ukraine, stated that he is motivated to complete a hat-trick of winning the best boxer prize, which he said has boosted his profile in addition to providing him the opportunity for some life-changing moments.

“I’ve won the prize twice and want to win it again. Aside from making me famous, the prize has helped me make some investments against the rainy day. I will be at my best at GOtv Boxing Night 23, the reason my opponent should be very worried,” he said.

Real One, who has won the single biggest cash prize for a Nigerian boxer fighting locally when he went home with N3.5million at GOtv Boxing Night 18, expressed a similar desire.

“I will do my best to win this. I know I have what it takes to win again and I’m confident,” he said.

He is due to fight Ghana’s Charles Amateifo who, along with Naimou Aziz Sampson, who will fight Baby Face, also bragged that it is the turn of a foreigner to go away with the cash prize.

“The cash prize is a major target for me. It will help me buy many things I need for my craft as a boxer. I’m ready, willing and able to do the business,” he said through an interpreter.

Visit www.dstvafrica.com and www.gotvafrica.com to subscribe or upgrade your DStv and GOtv package. With the DStv Explora, you can pause, rewind or record the exciting moments of the matches. And while you’re on the move, stream the matches on the DStv App which is free for download on the Apple and Google Play store and can be used on up to 5 devices.