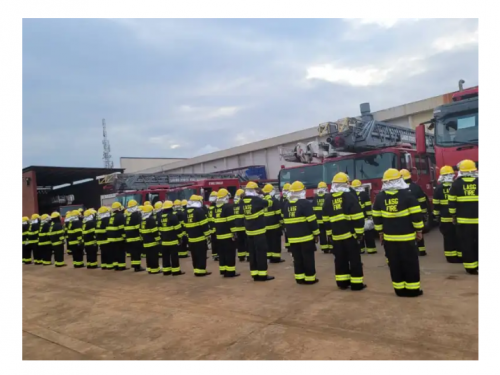 The Director, while unveiling the new crop of Firefighters at the Agency Headquarters, Alausa Ikeja, having completed six months intensive training, Stated that the officer are expected to Agency in Fire Safety Rescue and Firefighting Operations.

She reminded the officers that the personal Protective clothing which is essential for their maximum Protection was provided by the State Government to combat Fires and keep the Firefighters Safe and Secured as they perform their statutory duties.

While admonishing the newly inducted officers, Adeseye Stressed that focus should be on prevention of fire outbreaks According to her, saving life (Rescue), protection of lives and Property from the destructive consequences of Fire and related emergencies should be the priority as the best Fire fought is the one prevented.

Adeseye further clarified that the officers who were Later deployed to various State Fire Stations are to undergo operational attachment under the tutelage of experienced Fireman as crew members in order to equip them with the required skills and experiences that are required for successful Firefighting Operations.

The First female Director of LSF&RS commended the State Governor, Mr.Babajide Olusola Sanwo-Olu for providing the personal Protective clothing (PPC) for all Firemen of the Agency as a way of ensuring their safety in the course of duty.

She concluded that the Fireman should contribute their quotas in ensuring efficient and effective service delivery to the inhabitants of Lagos.