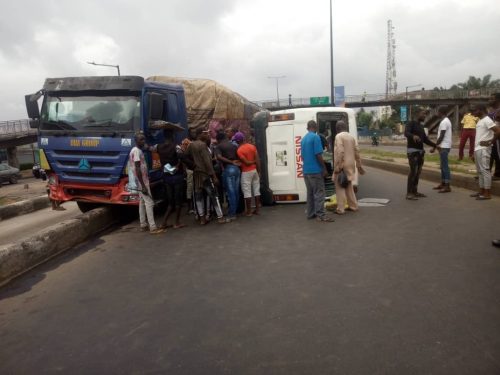 The incident which involved a white Nissan Coaster bus that rammed an articulated truck that suffered a mechanical error and collided with a culvert.

This resulted in the collision from behind and sideways fall of the bus that shut down of vehicular activities in the axis.

Situation Report emmanating from Office of the DG/CEO LASEMA, Dr. Olufemi Damilola Oke-Osanyintolu on the road accident at Idi-Iroko inward Maryland has it that;

“Information gathered revealed that the truck had a mechanical fault and rammed into the culvert, while the coaster bus ran into the truck from behind and fell sideways thereby shutting down vehicular movement.

“Fortunately there was no loss of life, however, an adult female sustained injuries and has been treated.