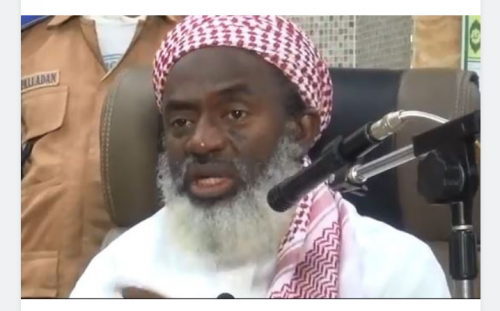 Islamic scholar, Sheikh Ahmad Gumi, is attempting to relocate fleeing terrorists that are being smoked out of the Northern Nigeria via military operations to Oke-Ogun, which is a political division of Oyo State, with 10 local government areas.

This allegation was made by a socio-political group, under the aegis of Alliance for Oke-Ogun Development (A.O.D), following Gumi’s  recent visitation to Igboho, headquarters of Orelope Local Government Area of Oyo State.

National Coordinator of AOD, Otunba Abiodun Fasasi, in a statement, described Gumi’s visit to Igboho as a clandestine move by him and others to further deepen the alleged ‘Fulanisation Agenda’ of Nigeria, adding that the move would make Oke-Ogun area, another hotbed of crisis between the dwellers and the marauding Fulani herders.

A video clip went viral on social media recently in which Gumi was seen with a Professor of Hematology-Oncology, Usman Yusuff, making comments at Muslim Grammar School, Igboho, saying the visit was for the continued unity of Nigeria.

Fasasi hinted that the recent victory of the Nigerian Army over terrorists in the North East and other parts of northern Nigeria, necessitated the visit of Gumi, Prof. Usman and others to Oke-Ogun area and called on the traditional rulers in the region to be wary of insiders, who are ready to sell out to terrorists.

The group also called on the Federal Government, especially the Directorate of State Security Service (DSS) to invite Gumi in a bid to finding out the real reasons for the visit of Gumi and others to Oke-Ogun area.

Fasasi stated: “It is rather mindboggling to hear that Sheikh Gumi and his co-travelers were in Igboho, Oke-Ogun. Sheikh Gumi is known all over the world as the harbinger, mastermind, mouthpiece, solicitor and patron of banditry in Nigeria. To him, there’s nothing wrong with banditry. As a matter of fact, he sees it as a flourishing business.

“It is more disturbing that an indigene of Oke-Ogun can willingly be a host to a personality like Gumi. We want the DSS to investigate the real reason for his visit. And the host equally, has to be investigated. This is a person consumed by his passion for banditry to the extent of drawing an analogy between banditry and Niger Delta militancy.

“As if that’s not enough, he is the one saddled with the responsibility of championing the course of amnesty for the bandits. He recently accused the Nigerian President of political gullibility for tackling the bandits, trivializing the military action ongoing in Zamfara State, known as festival of fire by tagging it ‘unwise decision that no reasonable solution can come out of.’

“Against the backdrop of the above, convincingly we now know better who Sheikh Gumi is, having seen the handwriting on the wall as the military action is neutralising, eliminating and destroying the bandits in their scores and as the bandits are fleeing the northern parts of the country, especially Zamfara and its environs. It’s unacceptable for Gumi and his bandits to see Oke-Ogun, Oyo State as their haven.”