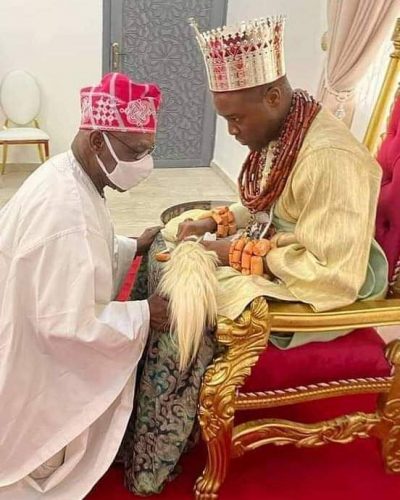 Thirty-seven-year-old serial entrepreneur Utieyinoritsetsola Emiko was, on Saturday, crowned the 21st Olu of Warri, and had immediately assumed the title of Ogiame Atuwatse III.

According to Akinyemi, Obasanjo, 84, on Sunday morning, travelled to the ancient Iwere Kingdom, which is the ancestral home of the Itsekiri in the Warri South Local Government Area of Delta State, to pay homage to the new monarch.

The media aide stated this on Sunday afternoon after a viral photo captured the aged ex-President paying homage to the young monarch.

Akinyemi described his boss as the “Baba (Father) of Africa” who can pay homage to all exalted traditional seats.

He said that Obasanjo did not kneel before the monarch but before the ancient Iwere Kingdom, which dates back to over five centuries.

“He (Obasanjo) went to Warri this (Sunday) morning to pay homage to the new king. It is a traditional institution; he (Ogiame Atuwatse III) is not the one sitting down, it is the institution that is on the throne.

“Obasanjo is the Baba of Africa and he can pay homage to every exalted traditional seat,” Akinyemi told our correspondent on Sunday.

Continuing, the aide said, “It was not Baba’s first time; he also once prostrated before Gbagura.”

The former President, who is the Jagunmolu of Egbaland, had, in August 2019, attended the coronation of Oba Saburee Bakre as the Agura of Gbagura in Ago-Oka, Abeokuta, Ogun State, where he also paid homage to the then-new king.

Obasanjo, unarguably one of the prestigious global citizens from Africa, was Nigeria’s democratically elected President between 1999 and 2007.

The former Nigerian military head of state between February 1976 and October 1979 had sat on many peace committees including those of the United Nations, African Union and Economic Community of West African States and had been instrumental to the restoration of peace in many parts of Africa including Liberia, Sudan, Ethiopia, amongst others.