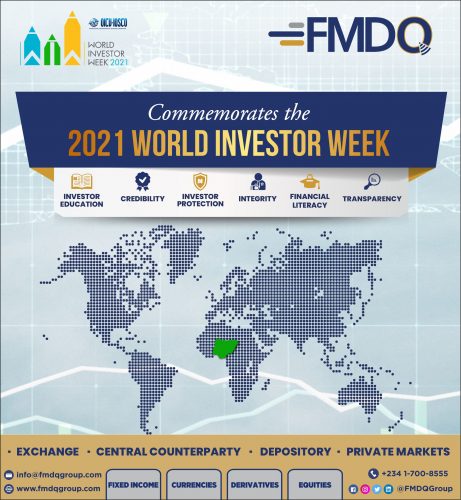 The World Investor Week (“WIW”) 2021, hosted by the World Federation of Exchanges, the global industry group for Exchanges and Central Counterparties, in partnership with the International Organisation of Securities Commissions, is a global campaign aimed at raising awareness on the importance of investor education and protection and promoting financial literacy. This 5th WIW, which is running from October 4 – 10, 2021, sees the uniting of over seventy-eight (78) Exchanges around the world in support of the awareness campaign through the “ringing of the bell” across multiple jurisdictions throughout WIW 2021.

FMDQ Holdings PLC (“FMDQ Group” or “FMDQ”) joined the world’s Exchanges to commemorate the WIW 2021 through targeted social media campaigns, which showcased FMDQ’s contributions to investor education and financial literacy. A virtual “Ring the Bell for Financial Literacy” Ceremony was also held on Thursday, October 7, 2021, to create awareness on the importance of investor protection and to promote financial literacy.

FMDQ Group is also committed to investor education and financial literacy which are executed through its financial markets education initiatives – FMDQ Academy, and the FMDQ Next Generation Financial Markets Empowerment Programme (“FMDQ-Next”) [its flagship corporate responsibility initiative]. FMDQ Academy delivers specialised financial markets training to key stakeholders – Financial Markets Regulators, Government & Agencies, Members, Investors, Media and the Public – in line with FMDQ’s markets and products development agenda, while FMDQ-Next promotes financial markets awareness and literacy among students across the  levels (primary, secondary and tertiary education levels, as well as to fresh graduates. FMDQ-Next, which was launched in 2018, has positively impacted over seven hundred and thirty-two (732) participants and counting.