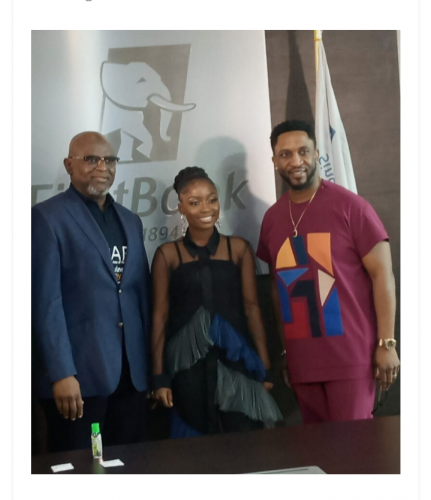 First Bank Hosts Esther Benyeogo, Reaffirm The 23-year old singing sensation had won the grand prize of N10 million, a brand new car and record label deal with Universal Music Nigeria after securing the highest viewers votes and displaying spectacular musical performances for over 13 weeks during the reality series which lasted from May till July 2021.

Esther’s coach on the show, Darey Art Alade, and runners up, Kpee Okoro and Eazzie were also part of the August visit.

Speaking during the visit at its Marina Lagos Head Office, First Bank’s Chief Executive Officer, Dr Adesola Adeduntan expressed the foremost banking group’s excitement and satisfaction for being the lead sponsor and a part of the world-class show which recorded huge acceptance and followership among Nigerians.s Support For Creative Industry

He said: “First Bank remains very proud and delighted to have sponsored the world-class music talents reality show, The Voice Nigeria Season 3. The show was creatively different and refreshing. It was an important addition and a remarkable boost to the mainstream art industry in Nigeria with a bankable structure.

“As an enabling organisation for over 127 years, we are keen to key into platforms that support and enhance entrepreneurs and entrepreneurship in Nigeria. One of the things that set us apart is our ability to support initiatives that fuel growth beyond the just profit motive.

“We were eager because of the identified potentials for development of the nation which the show offers. This is one of the ways we have remained relevant as a legacy institution in the country.

“It’s important to us to collaborate with partners who by their industry assist the economy to address poverty and boost youth employment. We are particularly interested in platforms that boost employment opportunities because they enhance growth and development.

“As such, job creation, creativity, entrepreneurship and employment-generating platforms excite us. We are not random but very systematic about our engagements and there’s a deliberate messaging that underlines our engagements.”

Dr Adeduntan further restated the bank’s interest in supporting the creative industry and promised to extend its support towards assisting Nigerian talents to achieve their creative dreams and ambitions.

“Though we are over 127 years old as the first bank in Nigeria, we remain young at heart, creative, agile and very dynamic.”

In her remarks, Esther expressed gratitude to First Bank for sponsoring the show and supporting platforms that help young people to showcase talents and achieve their dreams. She also appreciated her coach, Darey for his unflinching support and guidance which helped her achieve success.

Esther revealed that her next move would be around gospel and inspirational music that will truly bless lives. 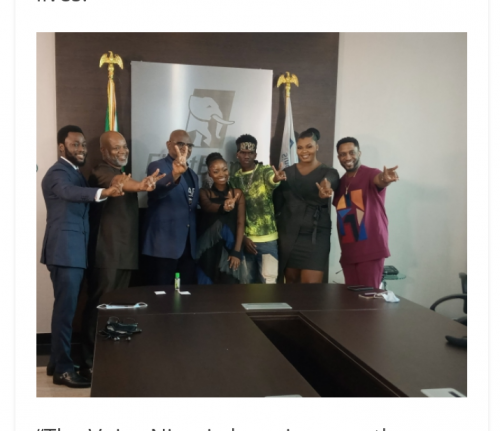 “The Voice Nigeria has given me the wings to fly and follow my dreams, which is exactly what I would be doing moving forward. Of course, with the help of God and guidance of my coach, I would be doing my own music which is a dream come true, to make music that would be a source of inspiration to people out there.’’

Darey who also doubles as the Co-Director at the Unity Studios Limited, Livespot360 also commended First Bank for seizing the moment and having the balls to make the partnership work.

He expressed delight over First Bank’s support which made the show worked seamlessly and commended all coaches, vocalists, crew and other professionals for working so hard and giving their best on the show.

“Our entire team are very excited over First Bank’s support. From the coaches, singers, crew and other professionals. The singers and coaches are all winners because they both worked so hard and the singers learnt so much. I desire to continue to see creative prodigies like Esther win more and influence others positively.”

“It was a no-brainer considering the quality and pedigree of the show but it was refreshing to see First Bank smartly spot the opportunity and quickly tied the knots to sponsor. It’s a big win and moment for the Nigerian entertainment industry. “

Akin Salami, the Chief Executive Officer of Unity Studios, producers of the show said first Bank did not only sponsor the show but guided the producers through the way and helped to surmount daunting challenges being a challenging time globally due to the COVID -19 pandemic.

“First Bank immensely helped us pulled through not only in the area of financing but also through their devoted hand-holding and critical support offered to us to achieve truly amazing results despite the COVID-19 pandemic.”