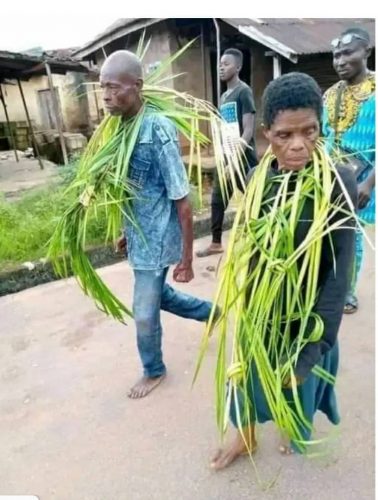 Operatives of the Imo State Police Command have arrested a couple and their daughter while their son, who is on the run, is wanted over the death of their last child in Duruegwele village, Umueze II, in Ehime Mbano Local Government of the state.

It was gathered that Lambert Ukachukwu, his wife, daughter, and son, Philip, allegedly killed 28-year-old Chukwuebuka at their home for being too stubborn and giving them sleepless nights.

the family reportedly hit Chukwuebuka with a piece of wood and left him to die. He was then buried in a shallow grave.

The youths of Duruegwele community noticed Chukwuebuka’s absence but when they confronted the family, they were told that Chukwuebuka traveled to Ghana.

The daughter eventually confessed to the murder when the youths threatened to burn down the family’s house.

Following the daughter’s confession, the father was forced to exhume his son’s corpse from the shallow grave.

Sep 23, 2021
The family is presently at the Imo State Police Command while Philip, the immediate elder brother of the deceased, is on the run.