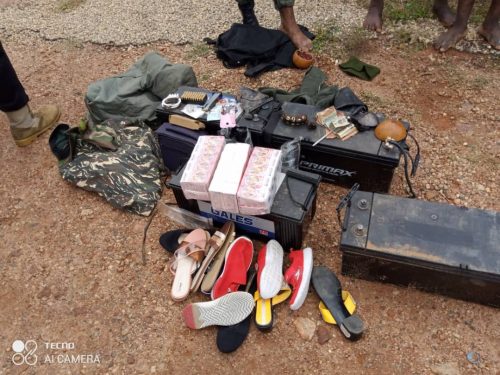 Ekiti state Police command organised  media briefing/parading of suspects,and on  the recent operations and achievements recorded by the Command under the leadership of *CP TUNDE MOBAYO, psc.*

The press statement goes thus: Gentlemen of the press,
I welcome you all on behalf of the Command to today’s press briefing that is aimed at unveiling and keeping you abreast of some of the recent operations and achievements recorded by the Command under the leadership of *CP TUNDE MOBAYO, psc.*

The Command appreciates all the good people of the State who have contributed in one way or the other to the successes recorded so far by providing credible and timely information to the Police.

Some of the recent breakthroughs of the Command are:

1. *CASE OF BURGLARY AND STEALING:* On the 27th of July, 2021 at about 0210hrs, a suspected burglar went to Abayomi Mall at Similoluwa, Ado-Ekiti, burgled some of the shops and carted away some valuables such as canvasses, wines, PS Games, Shoes and Cameras belonging to about six different shop owners. Upon the receipt of the information, the Command’s Rapid Response Squad(RRS) swung into action and during investigation, arrested one AKINOLA OLUFEMI of Apata Natha Area of Ado-Ekiti on 29th July, 2021 at about 1930hrs. The suspect, during interrogation, confessed to the commission of the crime.

2. *CASE OF ARMED ROBBERY:* On the 4th of August, 2021 at about 1400hrs, a distress call was received that a notorious armed robber, one ADEOSUN SEGUN, who specializes in snatching motorcycles from their owners was arrested by some residents at Ajebamidele Street, Ado-Ekiti and was about to be lynched. The RRS swung into action and rescued the suspect from Irate mob. During investigation, it was revealed that Abdullahi Ashimu, an okada rider, was stopped by the suspect, ADEOSUN SEGUN, of oke-ila street and asked him to convey him to Ajebamidele Street on the same date. On getting to his destination, ADEOSUN SEGUN attacked him with a dagger and forcefully collected the sum of ten thousand naira (#10,000) from him and also attempted to snatch his motorcycle from him but was unfortunately apprehend by some residents after Abdullahi Ashimu raised alarm. During interrogation, the suspect confessed to the alleged crime. Items recovered are : one dagger, one red Bajaj motorcycle and ten thousand naira cash.

3. *CASE OF MURDER, ARMED ROBBERY, IMPERSONATION, UNLAWFUL POSSESSION OF LIVE AMMUNITION, OTHERS:* On the 6th of August, 2021 at about 1000hrs, one FEMI OGUNWUSI of Efon Alaye was arrested during stop and search by Efon Alaye Divisional Police Headquarters Operatives. He was in possession of two stolen lorry batteries upon his arrest. During interrogation, FEMI OGUNWUSI claimed to be a Police Officer but it was later revealed that he was a fake Policeman. Investigation revealed that FEMI OGUNWUSI has been indulging in different criminal activities such as snatching of motorcycles and robbing of innocent people of their valuables. Further investigation revealed that sometimes July 2020, FEMI OGUNWUSI murder his 8 months son and lied that the deceased fell down from bed as the reason for his death. The house of FEMI OGUNWUSI was searched and the following exhibits were recovered: one pistol magazine loaded with thirteen 9MM ammunition, fifty rounds of 9MM live ammunition, two Mobile Police uniforms, heavy duty batteries, two Military Caps, one pistol grip, one Military belt, one handcuff, one dagger, two Police shoes, Mobile Police cardigan, two Mobile Police vest, one Mobile Police badge, old Nigeria currency, four voters cards, some hospital equipment, three packs of drugs, some pairs of shoes and some quantities of weeds suspected to be Indian hemp. The suspect has been transferred to RRS for further findings.

4: *CASE OF BURGLARY AND STEALING:* On the 10th of August, 2021 at about 0430hrs , a distress call was received by the Rapid Response Unit(RRS) that a group of hoodlums came to burgle an apartment located at Ajibamidele Street, Ado-Ekiti. Upon the receipt of the information, the Operatives of the RRS swung into action and mobilezed to the scene . During the encounter with the hoodlums, the following suspect were arrested; OGUNDAIRO SHOLA ‘m’ 36yrs, ABODUNDE OLUWASHINA ‘m’ 26yrs , KAYODE FOLOWOSHELE ‘m’ 31yrs and OYEKALE BOLAJI ‘m’ 38yrs. Exhibits recovered from them are: one sienna bus with Reg .No. AGR 996 CV containing large numbers of Gerrad zinc valued five hundred thousand naira (#500,000). During Interrogation, the four suspects confessed to the commission of the crime.

5:: *CASE OF CONSPIRACY, MURDER AND KIDNAPPING:* On the 6th of August, 2021 at about 1800hrs, a distress call was received by the Ido-Osin Divisional Police Headquarters that on the same date at about 1350hrs one ORISAN OLUWASESAN was attacked and shot dead while his wife ORISAN TOPE and the daughter ORISAN FEYISARA were kidnapped along Ewu road in Ilejemeje Local Government Area. Upon a tip off , one of the kidnappers AKINOLA FEMI, was arrested at Jolack Hotel, Ayetoro-Ekiti. He was allegedly sighted at the scene of incidence where orisan Oluwasesan, now the late, and his family were attacked and kidnapped. Investigation revealed that AKINOLA FEMI has been monitoring the deceased and his family where they lodged at Jolack Hotel, Ayetoro -Ekiti prior to the incident. Investigation revealed that AKINOLA FEMI specializes in providing information to Kidnappers terrorising Ilejemeje Local Government Area of the State and also participate actively sometimes.

Without mincing words, all the suspects arrested shall be charged to Court in due course.

As stated earlier, the applaud of the above breakthrough and lots more does not all go to the Police Command Operatives but also to the good spirited members of the public who supply credible and timely information to the Police. Credit goes also to other Security Agencies as well as the Amotekun Corps for their perpetual supports and cooperation.

The Ekiti State Commissioner of the Police, *CP TUNDE MOBAYO,* while reitering his commitment to the safety of lives and properties of the good people of Ekiti State, urges everyone to continue to be law abiding citizen, be conscious, vigilant and report any adverse incident or happening around their environs to the nearest Police Station or call 08062335577