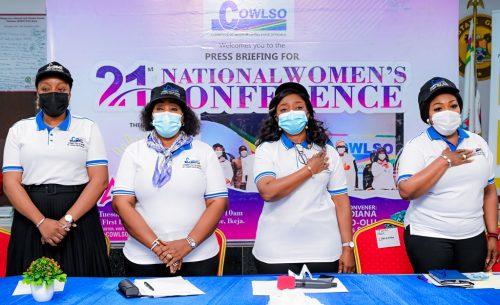 The Committee of Wives of Lagos State Officials (COWLSO) on Tuesday unveiled plans to invest massively to boost education across the state, especially in the rural areas and underserved communities.

COWLSO Chairman and First Lady of Lagos State, Dr. Ibijoke Sanwo-Olu said this at a press conference held at Lagos House, Alausa, Ikeja to announce activities lined up for the 21st National Women’s Conference of the Committee which is scheduled to hold between 26th and 28th October 2021 at The Convention Centre, Eko Hotels and Suites, Victoria Island, Lagos.

Sanwo-Olu, who addressed the media alongside other top COWLSO officials and members of the Conference Planning Committee, said the proceeds realized from the conference would be channeled to undertake school projects and procure equipment both for students in rural areas and children with special needs.

“This year by the grace of God, COWLSO will be going on the educational route. All proceeds from this conference will be channeled towards things that will help our children. In conjunction with the Ministry of Education, we will partner to have a school project, and not only that, we will ensure that our children have the best equipment to learn.

“We will also be looking at ensuring that children with special needs have the necessary equipment to learn. Education is the bedrock of society and it is very important that we catch them young. And so, that is one of the reasons we don’t joke with the National Women’s Conference. It has been on for the past 20 years and this year, we are having the 21st edition,” she said.

Sanwo-Olu assured that all was now set for the hybrid conference, and that the theme for this year is: “Awake!”

“The venue can conveniently accommodate 3000 participants but in view of the new realities, we will be having about 1,000 participants physically, while about 6,000 will join us virtually.

“In 2019, our theme was: “Unlearn, Learn and Relearn: 21st Century Women’s T.H.E.M.E.S Perspectives/Approach.” In 2020, we discussed “Exploring the Possibilities in a New World”. This year, our theme is “Awake!”

“We want our women to awake and be in tune with modern realities; we want participants to be equipped with the skills and expertise to make a positive difference and be solutions to the myriad of challenges confronting us as a state and nation. This is the essence of the theme this year.

“The theme of the Conference and Sub-themes will be examined by subject-matter experts who are seasoned and accomplished professionals in various spheres of life. They have been carefully selected to thoroughly dissect the topics,” she explained.

She also said in line with the tradition, some women who have distinguished themselves and made a positive impact would be honoured as inspirational women of the year, while for the first time; there would also be the inspirational youths of the year category.

She added that there will be COWLSO Virtual and Physical Markets through which participants will have the opportunity to visit and buy various items at a greatly reduced price from the accredited vendors, as well as free legal clinics and medical care.

On other activities, Sanwo-Olu said: “This year, our Gala Night will return and it promises to be a bumper package mixed with a potpourri of entertainment and raffle draws that will bring about exciting prizes for lucky participants.

“As part of the pre-Conference preparations, last week, we had a fellowship and prayer service both at the Chapel and Mosque at Lagos House, Ikeja. On Saturday, 16th October 2021, we shall embark on an Awareness Walk, with the theme: “Awake! Stop the Violence!”

Also speaking, Deputy COWLSO Chairman and Wife of the Deputy Governor, Mrs. Oluremi Hamzat commended the quality of vision and leadership provided by the First Lady, saying the purposeful initiatives had translated into welfare and socio-economic empowerment of women, the boy child, girl child, as well as the vulnerable in the state.

In her opening remarks, Chairperson of NWC Planning Committee, Mrs Nkem Sofela said in the last couple of months, the members of the committee had worked assiduously to firm up all necessary arrangements to ensure the huge success of the 21st COWLSO NWC, assuring that the stage is now set.

At the end of the press conference, COWLSO members led by the First Lady also embarked on an awareness walk in Alausa, Ikeja.