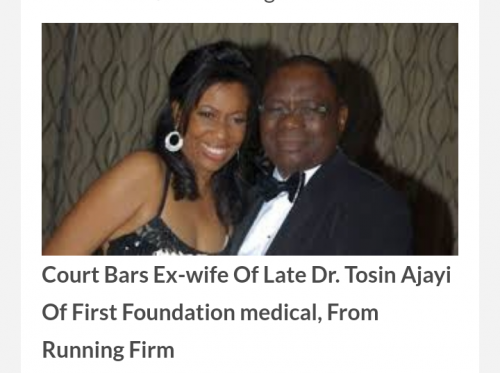 Lagos Federal High Court, today restrained Mrs. Oluwayemisi Ajayi, the enstraged wife of late Dr. Tosin Ajayi, founder and Chief Medical Director of First Foundation Medical Engineering Company Limited, from dealing with or running the affairs of her estranged husband’s firm, as a sole surviving director/shareholder pending the hearing and determination of the substantive suit brought against her and others.

The firm, First Foundation Medical Engineering Company Limited, was owned and registered in accordance with the law, by late Dr Tosin Ajayi, who died sometimes in April, 2020.

The court presided over by Justice Tijjani Ringim, made the order following an ex-parte application brought before the court by late Dr. Ajayi’s daughter, Miss Tomisin Ajayi, and his widow, Mrs Helen Prest Ajayi.

Joined as respondents alongside Mrs Oluwayemisi Ajayi are: Registrar-General of the Corporate Affairs Commission (CAC) and Mr. Patrick Abak, a lawyer.

According to the application, Dr Ajayi was a renowned medical doctor, businessman and a philanthropist before his demise on April 26, 2020.

He was married to Oluwayemisi and they had children. But they were separated for 35 years before Tosin’s demise. And that in the course of the separation, he married Helen Prest Ajayi and had a child with her, Tosin, who lived with Helen until his demise.

Both Helen and her daughter, Tomisin through their counsel, Mr. Abiodun Owonikoko (SAN) in their ex-parte application askee the court for an interim injunction against Oluwayemisi and her privies from dealing in the assets of the company, as a sole surviving director/shareholder, pending the hearing and determination of the main suit.

They also asked the court to restrain Oluwayemisi, her representative or privies from interfering howsoever in the business undertaking or other activities of the First Foundation Medical Engineering Company Limited, until an extra-ordinary general meeting is called for the purpose of appointing one or more director(s).

They also prayed the court for an order to serve the originating summons and other subsequent court processes on the third respondent by substituted means in lieu of personal service.

The applicants stated that the number of directors had fallen below the statutory minimum of two in accordance with section 239 and 271 of the Companies and Allied Matters Act, 2020.

The application was supported by an  affidavit deposed to by Miss Tomisin Ajayi, the sole surviving daughter of the deceased.

The judge restrained all the respondents from carrying out or dealing with any assets of the company pending the hearing and determination of the suit.

The judge has however adjourned the matter for two weeks to be heard by the court’s vacation judge.