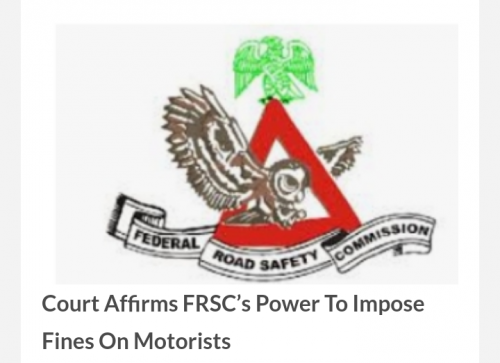 An Abuja division of Federal High Court, has Affirmed the powers of the Federal Road Safety Commission (FRSC) to impose  fine on motorists for traffic offences without first prosecuting them in a court.

The court presided over by Justice Taiwo Taiwo gave the decision on Friday, while delivering judgment a suit filed by a motorist, Dr M.Y Suleiman, seeking N10 million as damages against the FRSC for the detention of his car.

The detention followed Suleiman’s alleged violation of a traffic offence and his subsequent payment of a fine without first being prosecuted.

Justice Taiwo held that contrary to the plaintiff’s claim, the practice whereby Road Marshals issue tickets to motorists on allegation of the commission of offences under the National Road Traffic Regulations, 2012 and demand ‘offenders’ to pay a fine, did not offend section 6(6) of the Constitution, Rules 166 and 220 of the National Road Traffic Regulations.

The judge noted that the matter had already been settled by Tijani Abubakar JCA (as he then was) at the Court of Appeal, Lagos Division in the 2019 case of Olookan Vs FRSC.

Suleiman filed the suit marked FHC/ABJ/CS/1167/2019, following the seizure of his car, for, among others, when making a call in his car while driving.

He sought nine reliefs, including a declaration that fair hearing was not achieved by the FRSC issuing a ticket to him to pay a fine, since the defendants were the complainants, prosecutors and the judge in their cause and consequently the fine he paid was unlawful.

He further sought a declaration that the defendants not being courts of law, lacked the competence to find people guilty of offences.

In another instance, he prayed for a declaration that the defendants lacked the competence to detain his Toyota Picnic car,  for the fulfilment of the condition of proving his innocence of the violation of any of the provisions of the  FRSC Act, 2010 and or the Federal Road Safety Rules, 2012.

In dismissing the Plaintiff’s claims for want of merit, the judge held that Suleiman did not deny making a call in his car but that his phone was connected to his car.

He said: “It is borne out of the facts presented by both parties before the court that the Plaintiff was issued with a Notice of Offence and that the plaintiff actually paid the fine. I see no wrong done to the plaintiff who elected to pay the fine rather than being prosecuted.

“The Court of Appeal, Lagos Division has decided this issue similar to the complaint of the plaintiff herein in the case of Olookan v FRSC (2019).

“It is my conclusion therefore that all the issues for determination ought to and are hereby resolved against the plaintiff herein from my analysis of the issues vis a vis the law and decided cases cited in this judgement.

“Therefore, all the reliefs being sought are hereby refused whether in the main or consequentially.

“On the release of the vehicle of the plaintiff, and his claim for general and exemplary damages in the sum of N10,000,000, his entitlement to this claim has not been proved by the plaintiff.

“All he stated was that his vehicle was detained illegally from the 4th of July 2019 till the time the case was filed. It is not on record as to when the vehicle was released to him especially after the payment of the fine. The law is clear as to when the 1st defendant must release the vehicle lawfully impounded. It is trite law that the court cannot make up a case for any of the parties before it and the court is also not a Father Christmas to give unto anyone as it pleases.

“In concluding this judgment I think it proper to state that no reasonable court of law will set aside a law that is justiciable in a democratic society like the Regulations made pursuant to the Act establishing the 1st and 2nd defendants.

“These regulations are made in the interest of defence of public safety, public order and public morality. All hands must be on deck to ensure that the highways are safe for all motorists, road users and all the members of the public.

“Therefore I find no merit in the suit filed by the plaintiff, same is accordingly dismissed”.