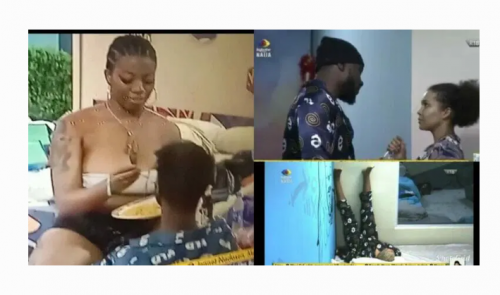 Yesterday was party night at the big brother house and housemates had a lot of fun. They danced and did a lot of drinking. The events that happened after and during the party were connected to “Gordons” which they drank.

Almost all the housemates got drunk and as expected some of them reacted according to the drunken state. Here are some high moments;

1. Liquorose fell and ended up crying in the bathroom. Princess mentioned to Sammie and some others that she had to bathe Liquorose.

2. Saskay could not handle the alcohol as she threw up a couple of times. The other housemates looked out for her and made sure she was ok.

3. Boma got drunk and poured some drink on Princess’s bag. He lost his batteries and had to be called by Big Brother to get other batteries.

4. Whitemoney admitted that he was very drunk and yet he was able to prepare food for his housemates. Though he left the food and ended up in the toilet. Jaypaul eventually finished the cooking.

5. Maria tried to appease Pere who was angry with her for her behaviour during the party, especially with other housemates.

Sponsored Content
Recommended by
6. Beatrice cold not find a comfortable sleeping position in her drunken state

7. Jackie B helped Boma prepare for bed. Guys, she literally helped him take off his clothes.

8. Angel professed her love for Yousef. She said she would like to be with him. However, Yousef didn’t take her seriously.

9. Cross walked around aimlessly for a while and was tucked into bed by Princess.

10. Princess mentioned to Sammie and Whitemoney that she hated having to go bed drunk and alone. Sammie jokingly suggested she linked up with Big Brother.