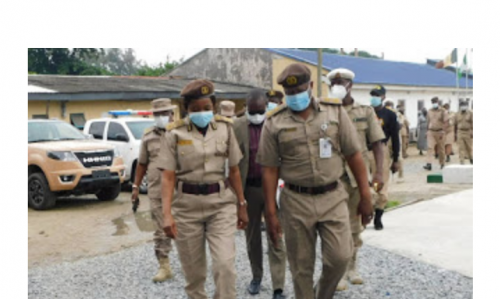 The Assistant Comptroller General of Immigration, Zone A, Oluremi Ajoke Talabi, during the week, visited the Lagos Command of the Immigration Service.

In a statement signed by Jide Ogungbe, Lagos Command spokesman and made available to NAOSRE, Talabi was received on arrival by the Command’s Comptroller of Immigration Service, CIS, Bauchi Aliyu.

Addressing officers and men of the Command, Talabi commended the Aliyu led  team for carrying out their duties without attracting complaints from the public.

She warned officers against revealing any official information that is meant to be treated as confidential.

She advised officers to adopt “a need to know basis principle” in managing information.

In addition, Talabi pointed out that Lagos Command has the highest number of personnel in the country, a fact that calls for utmost professionalism in the overall interest of Nigeria in line with the administrative policies of President Muhammadu Buhari and Comptroller General of Customs, Colonel Hammed Alli, ret’d.

Earlier, the Lagos Command CIS, in his address, dutifully gave a detailed account to the Zonal Coordinator with specific regards to the challenges and developments in the Command.

He revealed that his first project from the moment he arrived was to improve the condition of LSC’s Provisional and Annex offices, a task he disclosed has been accomplished strictly through Corporate Social Responsibility, CRS, supports from friends of the Service. The CIS also revealed that he was able to construct both the Quarter Guard and Parade Ground through the same donations.

Aliyu further disclosed that there is an imminent plan of the International Organization for Migration to fully fund and oversee the construction of a Personnel Training and Resource Centre for the Lagos Command.

He unveiled plans to build additional toilet and bathroom facilities to augment the existing ones.

CIS Aliyu informed the Zonal Coordinator that he has formed a committee that is presently working on the development of a compendium that would offer a concise interpretative collection of the most frequently violated Immigration laws for the sensitization of stakeholders.

He noted that the outcome of his visit to Governor Babajide Sanwo-Olu has birth the governor’s generous heart of donating land that can accommodate the construction of the Service Headquarters structure in Lagos.

He revealed that his persistent verbal and written requests have resulted in the setting up of a Security Forum headed by the Secretary to the State Government for Intel and ideas sharing amongst security agencies in the state.

He stated the proposal he submitted to the Governor’s Office for the planned mop-up and repatriation operation of irregular migrants residing in the state.

“The proposal is a direct response to the concern raised by stakeholders during the meeting chaired by the Governor to address the menace of motorbike riders operating in the state,” he said.

However, he stated that despite the positive results of his efforts, more still needs to be done.

The CIS, therefore, tabled a number of requests for the ACG’s attention to improve the service delivery capacity of the Command.

He requested the facilitation of the deployment of junior officers and drivers as well as follow-up by her office to facilitate the completion of the Command building project.

He also requested support for the proposed inclusion of the E-Migrant registration slip as a checklist for resident permit applications; the setting up of a Music Band and the renovation of the Command Holding Centre.

The ACG however, promised to support within available resources and called for more commitment to duties.