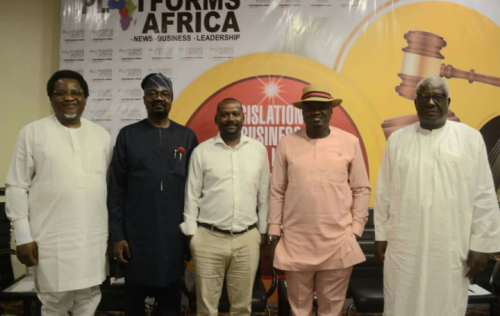 Stakeholders in Africa, particularly in the Nigeria’s oil and gas sector, on Monday, raised the alarm over fresh threat being constituted to the Foreign Direct Investment (FID) and ease of doing business drive, by Senate directive for Nigeria Liquefied Natural Gas (NLNG) to pay N18.4 billion to host communities for right of way (RoW) it acquired in 1989 for N73 million.

The stakeholders who gathered at the Platforms Africa Forum 2022 in Sheraton Hotel Lagos, maintained that Senate Lacked the Power to Order NLNG to pay N18.4 billion – Partner.

Partner, Bloomfield Law Practice, Dr. Ayodele Oni, who spoke from Houston, Texas, and the Keynote speaker, Barrister Jide Ologun, unanimously declared that the Senate’s power guarantee by the constitution is enormous but this does not include giving an order to a company to Pay money within a stipulated time.

“The Senate is not a Court. That right to order resides solely with the Court,” Ologun said.

“The 9th National Assembly has done well and set a standard for the 10th Parliament to surpass. But one area the forthcoming Assembly should refrain from is giving a directive to companies. The recent directive to NLNG to pay N18.4bn within eight weeks is not within the powers of the Senate, ” Oni added.

All lands belong to government, and it was the government that gives them the land. In addition, it was confirmed that the NLNG paid N73million in 1989, any other thing the NLNG is doing will only amount to Corporate Social Responsibility (CSR). The directive for the company to pay will only mount a roadblock to the Foreign Direct Investment (FID).

Veteran energy journalist and analyst, Tajudeen Adigun, who stated that Nigeria’s energy sector is suffering dearth of FID with many companies folding up due to legislation, he urged the 10th National Assembly to concentrate on making laws that will engender FID.

“The Senate has the Constitutional oversight function but in discharging this role, it must always consider the ease of doing business.

The communities must be protected while companies too deserve protection to succeed. The NLNG is a company bounded by law and anyone enraged by action or inaction of the company should approach a Court for redress. Well, they can write a petition to the NASS and the parliament too has the right to accept the petition and look into it. But only the Court, not the NASS, has the right to make an order for a company to pay within a stipulated time. The bottomline is that the parliament should consider ease of doing business in discharging its legislative duties.”

The Nigerian Senate, in September 2022, ordered the NLNG Limited to pay N18.4 billion on its acquired land for Right of Way (RoW) to 73 host communities and 200 families in Bonny, Rivers State, within two months.

The Senate, which had received a petition from the communities through its Committee on Ethics, Privileges and Public Petitions, confirmed that the NLNG actually paid
N73 million in 1989 when it acquired the land for its right of way (RoW). It, notwithstanding, issued a directive that the NLNG has just two months to pay up.

The NLNG, in a statement issued a day after the Senate’s directives, simply said it was evaluating the resolution and circumstances surrounding it. It adds: “NLNG wishes to state that it has always conducted its business responsibly and in accordance with the laws of the Federal Republic of Nigeria, including in this specific matter.”

While some have argued that the NLNG, should reagrdless of the initial payment in 1989, obey the NASS and pay off the newly ordered N18.6bn, others who perceived the Senate action as setting the people against the NLNG (the duo has reportedly enjoyed mutual relationship for long) have argued that the NASS is not a Court that should issue a directive for a company to
Pay certain money within a stipulated time.