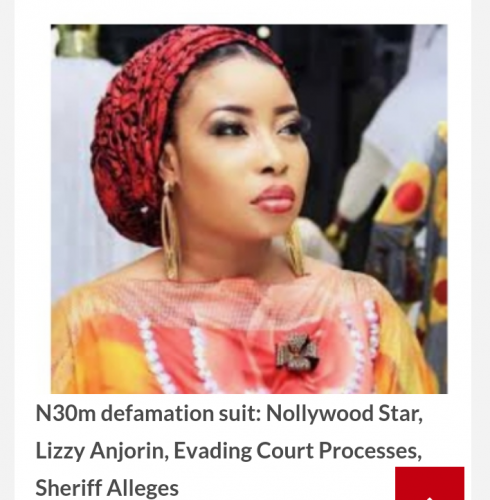 A sheriff of the Lagos State High Court, Inusile Babatunde, has alleged that a Nollywood star, Mrs Elizabeth Anjorin Lawal, popularly known as Lizzy Anjorin, is evading court processes in a N30 million defamation suit filed against her.

Lizzy Anjorin was dragged before the court by a Canada-based, Yoruba art and culture promoter, Mr Joel Olaniyi Oyatoye, popularly known as Baba Asa, but all attempts, according to the Sheriff, to serve the actress court processes have been unsuccessful.

Babatunde made the allegation in his six-paragraph affidavit sworn to on August 10, 2021 and filed in support of an ex-parte motion seeking to serve the court process on the defendant bysubstituted means.

The Sheriff averred that he had made frantic efforts to serve the actress with court processes on several occasion but she allegedly made herself inaccessible.

He stated that the last attempt to serve the defendant was made on July 27, 2021, at her business address, Lizzy Anjorin Clothings, Road 5, Shop ‘I’ 323, Ikota Shopping Complex, VGC Lekki, Lagos State and he met with the defendant’s sales girl who confirmed that her boss was around. But after calling her on phone she allegedly  avoided the service of the court processes.

Furthermore, the deponent averred that many people had called him, claiming to be lawyer to the defendant and requested that the court processes should be handed over to them. But he requested a Power of Attorney from Lizzy Anjorin, which they fail to produce.

In the claimant’s application pending before Justice Josephine Oyefeso, seeking to serve Lizzy Anjorin by substituted means, Baba Asa prayed court for an order granting him leave to serve the court process on the  defendant by pasting it in a conspicuous place at the mentioned address.

Oyatoye in the the substantive suit, marked LD/ADR/3481/2021, is asking the court to compel Lizzy Anjorin to pay him N30 million for alleged defamation.

The plaintiff, in his statement of claim dated February 23, and supported with a 13-paragraph affidavit, alleged that the defendant, Lizzy Benson, defamed him on her social media page.

Baba Asa averred that he became conversant with the actress in the course of his business as a promoter and enabler of Yoruba art, culture and tradition in 2018 when he was preparing to organise the annual Asa Day for 2018 in Canada.

He averred that the actress was contacted to participate in the event and all issues relating to her participation and engagement in the Asa Day 2018, were sorted out effectively and conclusively.

Baba Asa claimed that on January 30, 2021, several of his acquaintances informed him that they saw a post on social media attributed to the actress titled ‘The Fraudster of Manitoba and the Fraudster of Winnipeg’ which alleged that Baba Asa perpetrated a fraud on her and people connected to her.

The claimant averred that there was no justification for the defendant to issue the post regarding his personality, adding that the content of the post was damaging to and disparaging of his character.

Baba Asa further stated that in response, he briefed his counsel who wrote Lizzy Anjorin on February 1, and the letter was delivered to the actress at her business address in Lekki.

He alleged that despite receiving the letter, the defendant again went ahead to issue, publish and commissioned further defamatory posts against him.

He prayed the court to order Lizzy Anjorin to immediately delete all her defamatory posts on her Instagram handle and other social media platforms, tender an unreserved apology for her alleged action against him and pay him the sum of N30 million as damages for the wrongful and unlawful assassination of his character.

Finally, he also asked the court to grant an order of perpetual injunction restraining the defendant from engaging in any other damaging post on social media or any other platform, concerning, touching or that will affect him.