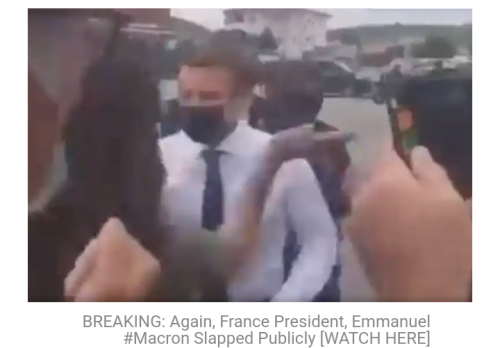 According to video circulating round on social media, French President Emmanuel Macron has been slapped in the face by a woman.

In the viral video, Macron was hit by an attacker. The incident reportedly happened on Sunday.

An  unidentified woman slapped Macron in the face before officers quickly move in. The president, meanwhile, is pulled away.

This is not the first time Macron would be getting slapped publicly.

He was slapped by a man in the crowd during a walkabout session in France’s Drome region in July 2021.

The incident happened as Macron was in the southeast region meeting with restaurant owners and students to discuss how the COVID lockdown in the country is easing and life is returning to normal.

The individual, who slapped him was heard chanting “Montjoie Saint Denis” during the incident—a French army battle cry from the time when the nation was still a monarchy.